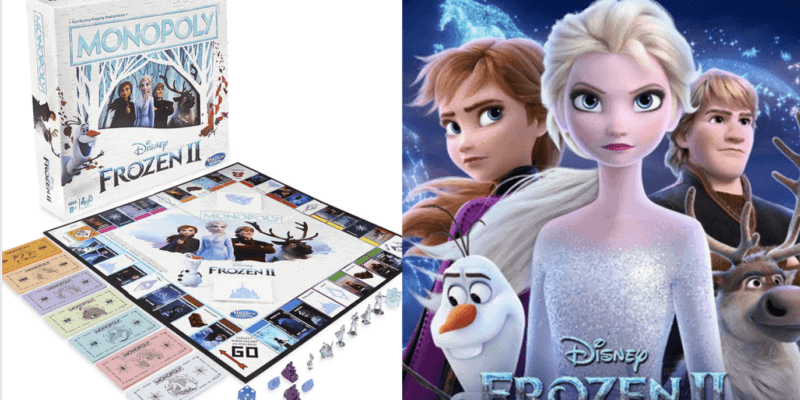 Family game night is a time-honored tradition in many American households and, if you have Frozen fans in your home, we’ve found the perfect option for your next board game battle.

This Frozen 2 Monopoly game is currently available on shopDisney.com for just $22.99!

This Disney board game plays like traditional Monopoly, but with a Frozen twist! Players can activate Elsa’s magical ice powers when they share memories during gameplay.

As per shopDisney’s official description of Frozen Monopoly:

“The Properties are scenes from the movie, and come in color sets. If a player lands on a Snowflake space or draws a certain Chance card, they can place the Snowflake token on any property they own. Whoever lands there has to pay double rent. Activate Elsa’s epic powers by sharing a favorite family memory, and use the Snowflake token to receive double rent. The last player with money when all other players have gone bankrupt wins!”

We love that the houses in this Disney version of Monopoly look just like those in the village of Arendelle (including Anna and Elsa’s Arendelle Castle!)

The attention to detail on each Monopoly character token is impressive, down to Olaf’s buttons and single tooth!

The Mattias Monopoly piece has Arendelle’s symbol on his shield.

And the Elsa token is the Disney Frozen 2 edition of the Monopoly board game even includes the epaulettes she wears in the Frozen 2 movie!

Frozen 2 Monopoly is designed for ages 8 and up and is for two to six players. shopDisney’s description states the board game includes”

If you want to make Disney game night a ritual in your house, we’ve got you covered! For families with little ones, Disney Parks UNO is a great option.

For families who want to relive their favorite Disney theme park attractions at home, the upcoming Jungle Cruise board game and Haunted Mansion board game are both sure to be game night hits.

We’ve also rounded up lots of Disney board games that will fit your family’s style no matter what types of tabletop games you like (even if you’re a fan of Disney’s darker side!)

Are you going to order Frozen 2 Monopoly for your next Disney family game night?

Comments Off on Journey to the Enchanted Forest With ‘Frozen 2’ Monopoly!