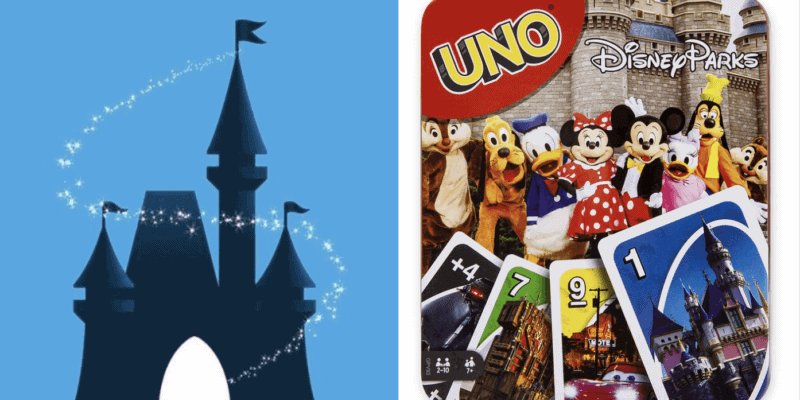 UNO is one of the most classic family card games. I certainly remember UNO’s brightly colored cards being a staple of family game night growing up, and I bet you do too! Now, the iconic game has gotten a facelift so magical it could only come from Disney!

There’s something for every Disney fan in this game! Recommended for ages 7 and up, Disney Parks UNO has one special twist that the original card game doesn’t have. When the “Sorcerer Mickey” action card is played, everyone must pass their entire hand to the left.

Disney Parks UNO comes in a commemorative tin and can be played by 2 to 10 people, so it’s perfect for any family gathering (or even date night at home!)

If you want to host a Disney themed family game night, Disney UNO is a good start, but you’ll need more for a truly epic evening. Check out these great Disney board games that are sure to entertain everyone in your household, from the Disney trivia nerds to the Nightmare Before Christmas diehards.

For those who wish they lived in a galaxy far, far away, this Star Wars version of Cards Against Humanity is the perfect tabletop game. As with the original Cards Against Humanity, the game isn’t 100% family-friendly, so do some recon ahead of time and remove certain cards if you plan to play with little ones.

Anyone who is sad about the delayed release of Dwayne Johnson’s Jungle Cruise movie can soften the blow with this upcoming Jungle Cruise adventure board game, based on the iconic Disney World and Disneyland ride. The game is set to hit shelves in June 2020.