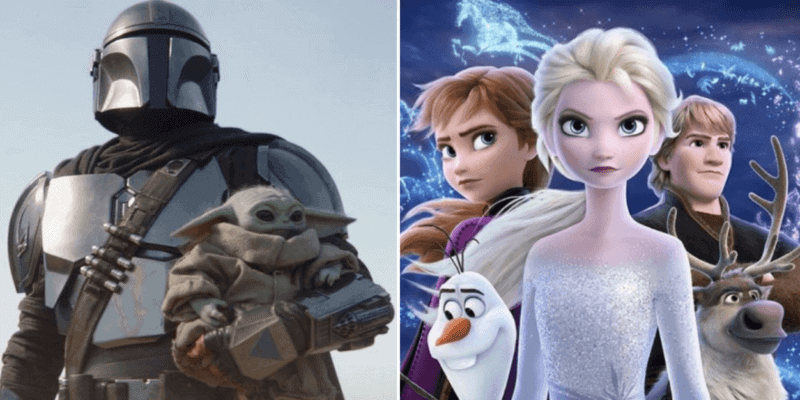 One comment that was, perhaps, less pronounced had to do with merchandise sales. It would seem that Jon Favreau and Dave Filoni’s hit Star Wars series, The Mandalorian, has become more popular than mega-franchise, Frozen.

“…our merchandise sales on Mandalorian is one extraordinary marker in terms of the fact that while theatrical continues to be a great way for us to build franchises, our first big data point using our Disney+ platform to sell merchandise has been extraordinarily successful for us as well.”

Last year, Disney promoted “Mando Mondays”, dropping new Mandalorian merchandise every Monday of the show’s second season. This was likely part of what Chapek was referring to when he noted that “using our Disney+ platform to sell merchandise has been extraordinarily successful.”

In addition, the Disney CEO was probably referring to the fact that it is difficult to go anywhere without seeing Grogu (AKA “Baby Yoda”) and bounty hunter Din Djarin (Pedro Pascal) on t-shirts, coffee mugs, and even cereal boxes.

Disney’s official quarterly earnings report further confirms that, when it comes to merchandise sales, Grogu and Djarin have ousted Frozen from its pedestal — who knew a little green alien would steal people’s hearts more than Anna, Elsa, and Olaf? Per the report:

The news that Mandalorian merchandise has been helping to keep Disney’s retail division afloat during the COVID-19 pandemic should not be surprising to those who follow toy industry news.

Hasbro, who is Disney’s officially licensed manufacturer for Star Wars and Marvel toys, previously shared that The Mandalorian — and other Star Wars lightsabers — had also helped their company remain above water throughout 2020’s challenges.

What’s Next For Frozen and The Mandalorian?

Fans of both the Frozen franchise and The Mandalorian series have a lot to look forward in the coming months and years. The Mandalorian is gearing up for its third season on Disney+ — Pedro Pascal will be reprising his role as the title character and has suggested there may be a big time jump on the way.

As for Frozen, although no Frozen III film has been announced yet, there are Frozen-themed lands coming to both Disneyland Paris and Hong Kong Disneyland in the near future. Guests at these Disney Parks will be able to enter the world of Arendelle like never before!

This first-of-its-kind interactive dining experience will showcase Elsa and other beloved Frozen characters — maybe we’ll even see Kristoff and Sven! — in a musical extravaganza, all while Guests dine on Norwegian-inspired fare.

What do you think about the fact that The Mandalorian is overtaking Frozen in merchandise popularity? Which franchise do you prefer?

Comments Off on ‘The Mandalorian’ Is Bigger Than ‘Frozen’?! Here’s Why