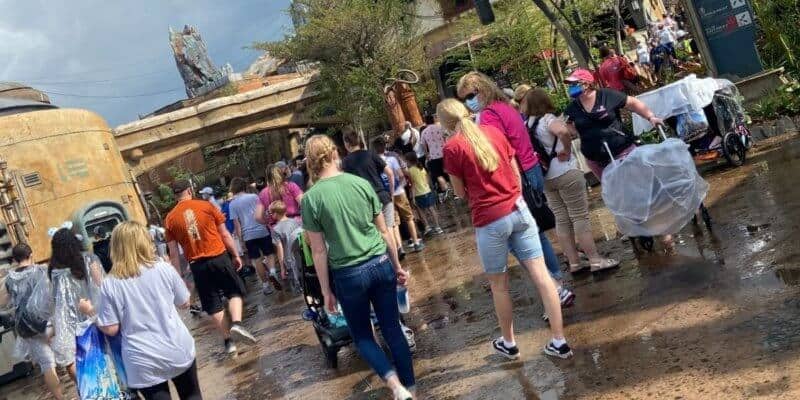 When The Walt Disney Company began reopening its global theme parks amid the COVID-19 pandemic, there were numerous changes to the typical Disney experience. For example, face masks have been required for Guests age 2 and over, social distancing measures have been in place, fireworks and other shows have been suspended, and capacity has been limited.

Although Disney Parks are beginning to return to pre-pandemic operations in certain ways — Disney World has begun loosening face mask restrictions for outdoor photos and the Festival of the Lion King stage show recently returned at Disney’s Animal Kingdom, for instance — there is one thing that is staying the same, at least for now.

During today’s second-quarter earnings call, Walt Disney Company CEO Bob Chapek noted that both Walt Disney World Resort and Disneyland Resort are operating “at or near our reduced capacity levels for the current quarter.”

Given that demand for the Parks is high — particularly at Disneyland Resort, where Guests waited over a year for reopening — it is not surprising that all six of Disney’s domestic theme parks — Magic Kingdom, EPCOT, Disney’s Animal Kingdom, Disney’s Hollywood Studios, Disneyland Park, and Disney California Adventure — are operating at their current capacity limits.

It is worth noting that CEO Chapek did not announce what the current capacity limit is at either U.S. Disney Park property. The last time Disney confirmed capacity for Walt Disney World, it was at 35% of the maximum. He did, however, say that capacity increases have already begun in Florida:

Also of note is the fact that Disney is currently required both a valid theme park ticket or Annual Pass and a Park reservation for all Guests who enter. At Walt Disney World Resort, the Disney Park Pass system will be in place until at least 2023. No specific dates have been announced for Disneyland Resort’s new reservation system.

What do you think about Bob Chapek’s capacity comments today?