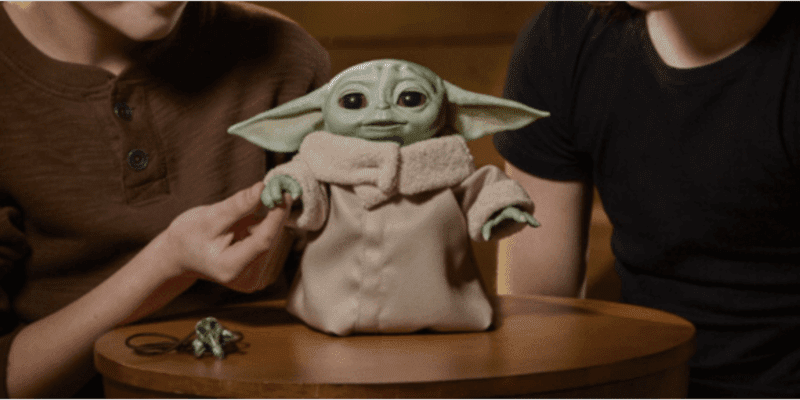 Before The Mandalorian Season 1 premiered on November 12, 2019, showrunner Jon Favreau and executive producer Dave Filoni decided to take a major gamble. They didn’t announce the existence of “Baby Yoda” until the series debuted.

The cutest Star Wars character in the galaxy — who we now know is a 50-year-old infant Order 66 survivor named Grogu — immediately took America by storm.

Although fans had to wait on Baby Yoda merchandise to start hitting store shelves, once it did, many items quickly sold out. Hasbro, who holds the master toy license for both Marvel and Star Wars, has thoroughly enjoyed the spoils of Grogu’s immense popularity.

CNBC noted that the Star Wars franchise has helped Hasbro stay afloat during the challenges of the COVID-19 pandemic, even without traditional theatrical releases:

While the Rhode Island-based company saw sales of its licensed content from entertainment studios fall 12% to $1.08 billion for the full year, its sales of Star Wars grew by 70% over that period.

Last year marked the first time since 2014 that Disney did not release a Star Wars film in theaters, but sales of Grogu — the child formerly known as Baby Yoda — and of toy lightsabers helped fuel growth for the toy franchise.

In addition to a wide variety of Grogu action figures, animatronic toys, and other items, Hasbro’s lightsabers — including its Darksaber model — have been immensely popular.

Furthermore, the toy manufacturer has long been known for its Star Wars The Black Series action figures.

“What’s been great for our business is that streaming content is now being enjoyed by so many people, it has really hit a tipping point,” CEO Brian Goldner said Monday on CNBC’s “Squawk on the Street.” “And that tipping point means that you have tens of millions of people watching a piece of content over a given early period of time that allows us to ‘eventize.’”

With at least 11 new Star Wars series set to hit Disney+ over the course of the next few years, it doesn’t seem like Hasbro will be running out of merchandising opportunities within the Star Wars galaxy anytime soon.

What are your thoughts about the Star Wars universe keeping Hasbro alive during the pandemic? Are you a Star Wars toy collector?

Comments Off on ‘Star Wars’ Is Helping Hasbro Survive the Pandemic