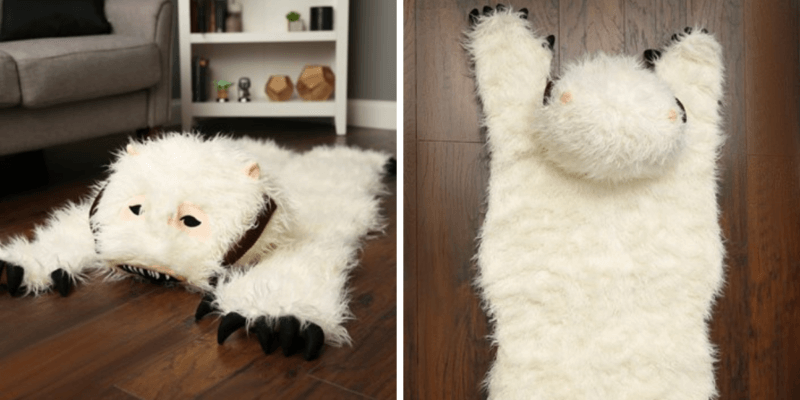 Have you ever wanted to feel like Luke Skywalker when he finds himself on the icy planet of Hoth? Well, if so, you’re in luck; Fun.com is selling an exclusive Wampa rug.

This incredible piece of homeware is as hilarious as it is epic and now retails for just $60.00.

If that sounds steep to you, when the Wampa rug first premiered in 2010, it reportedly retailed for a whopping $130.00!

You can buy this incredible Hoth creature exclusively at Fun.com. You’ll remember this frightening creature as the beast that takes Luke Skywalker prisoner at the beginning of Episode V: The Empire Strikes Back.

It’s in his conflict with the Wampa that Luke starts to master his use of the Force as he calls his blue lightsaber to his hands while he’s hanging upside down in the snow.

The terrifying beast then gets a good dose of kyber crystal to the arm and loses a limb to the Jedi Master in training. Luke is later rescued by Han Solo, who cuts open a Tauntaun to keep his friend warm.

The Wampa fight is just one amazing moment from an incredible movie that is also notable for introducing the world to Boba Fett. Many consider Empire Strikes Back to be George Lucas’ magnum opus, and the Wampa scene is just one of many reasons why!

The Wampa moves from Hoth … to your living room floor

The Wampa doesn’t look so scary when he’s adorning your living room floor. The rug is made from 56% acrylic, 44% polyester long-pile faux fur; 100% polyester fabric & fiberfill and measures 54″L x 26″W. It features anti-skid material on the bottom and comes in one size.

Formerly, the product was distributed by ThinkGeek way back in 2010. Back then it came with a hefty $130.00 price tag, which many Jedi found too much. Thankfully, the product has been picked up by manufacturer Jay Franco, who have reduced it to be affordable on a Padawan’s salary.

We’re super pleased, but we can’t help feeling a little sorry for the poor Wampa. Oh well, time to lay it out on the dining room floor as we prepare some delicious blue milk!

The rug is available right here, exclusively at Fun.com. If you’re a Star Wars fan and you’re in need of a rug, we’ve got you covered.

The Star Wars universe is vast, but the amount of hot Star Wars inspired merchandise is even vaster! Other available products include this incredible Mandalorian inspired nerf blaster and an electronic darksaber, also as seen in the hit Disney+ series.

Will you be getting a Wampa rug? Let us know in the comments below.

Comments Off on Live Like Luke Skywalker With This Epic Wampa Rug!