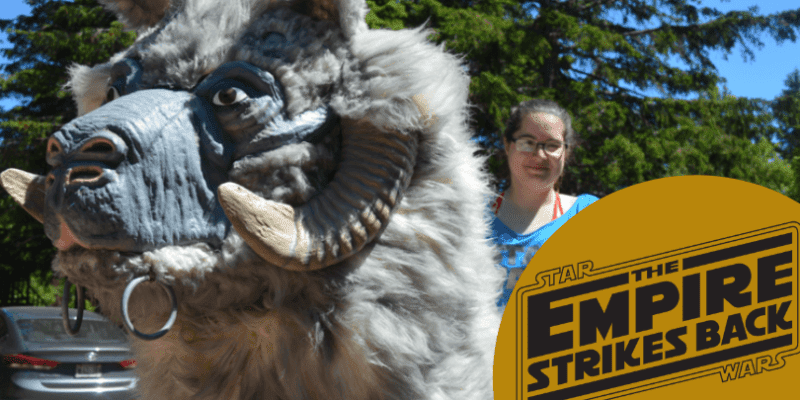 Cosplay is a pretty big part of the Star Wars fandom. From Princess Leia to the ruthless Bounty Hunter Boba Fett to your average Stormtrooper, fans love dressing up as their favorite Star Wars character.

However, some Star Wars fans take things to the next level. Christina Smith is one of these fans. She didn’t just make a Star Wars inspired costume, but rather a full-sized ridable creature from the far reaches of the Star Wars galaxy, namely the ice planet Hoth.

Smith and her boyfriend are members of the 501st Legion, a Star Wars fan group dedicated to screen accurate cosplay from the Star Wars Galaxy.

It’s no surprise then that this superfan went the extra mile to make her own Tauntaun using a steel frame and 200 pounds of poly-fil, and foam! She even used ram horns and meticulously crafted the creature’s eyes to get them just right.

You’ll recognize this iconic creature from Star Wars Episode V: The Empire Strikes Back. Tauntauns are used on the planet Hoth by the Rebel Alliance to get around the snowy terrain without drawing the attention of the Galactic Empire. Luke Skywalker famously rides one just before the battle of Hoth, before he is incapacitated by a Wampa. Han Solo then uses Luke’s lightsaber to cut open his Tauntaun in a pretty grisly way so that Luke can sleep inside it and stay warm.

They have also featured in other Star Wars media like the Lego Star Wars game and MMORPG The Old Republic.

We personally wouldn’t recommend cutting open Christina’s Tauntaun with your own lightsaber unless you’re particularly into poly-fil!

Christina really did an excellent job of making a Tauntaun that looks like an official prop from the Star Wars movies. She explained why she does what she does;

‘When I was little, I was so in love with everything that had to do with the original Star Wars … I want to make the next one fully animatronic so it will snort on people; it will move and react to people. That’s what I want.’

We can definitely imagine Christina’s creation as a central feature of Disney’s Hollywood Studios at Galaxy‘s Edge!

Need more Star Wars in your life? Check out these 10 amazing LEGO sets, these adorable planters, and these Baby Yoda cups!

What do you think of this fan-made Tauntaun? Let us know in the comments below.