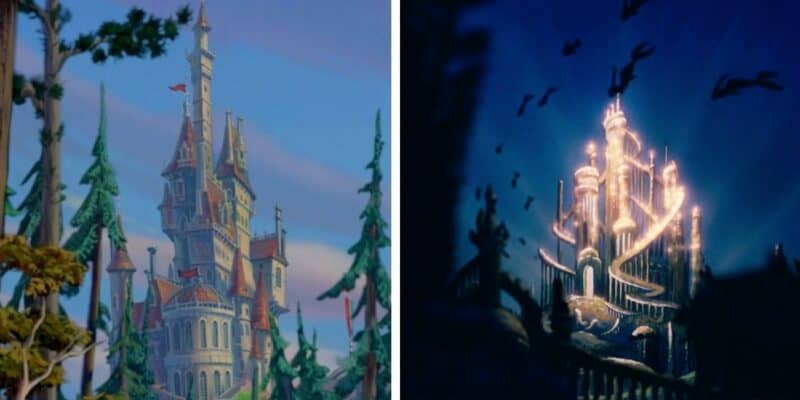 One thing that is always fun to do when you watch a Disney film is looking for clues to see how it could be related to other Disney movies!

We have seen a tonne of Disney animated films connect characters and movies together in the past, such as Rapunzel, Flynn Rider, and Princess Tiana showing up in Frozen. You can see Scar from The Lion King in Hercules, Sebastian From The Little Mermaid in Aladdin, the magic carpet from Aladdin in Princess and the Frog, and the list goes on. Pixar films have a way of doing this as well, which has led many Disney fans to create theories of their own.

Recently, one Disney fan came up with a theory that connects The Little Mermaid and Beauty and the Beast — and it is pretty wild. Both films were made during the renaissance era of Disney, so to think that the animators may have tossed in some similarities is definitely plausible.

Here’s a thought; perhaps the events of Beauty and The Beast predate what happens in The Little Mermaid by an extremely long time, we’re talking perhaps a millennia. If you look at the castles of both movies they’re fairly similar, what I’m proposing is that it’s the exact same castle but had been flooded over many many years and as a result is under the ocean.

Furthermore in Beauty and The Beast at we can speculate that some of the fish in the areas surrounding the beasts castle may have been transformed people much like Lumiere and Cogsworth only the fish, for one reason or another, weren’t freed of the curse at the end of the movie.

So these fish start to breed and prosper as the ocean rises over time the mermaids show up they form these colonies of sentient fish into a society while Ursulas followers are fish whome reject King Neptunes regime, thus explaining the different between the fish who are intelligent and the regular fish and also connecting both movies.

After taking a read, the idea about the castles being the same is interesting as they do have a similar narrow shape, plus something that was not noted but is similar between the films is that both the Beast and Ursula were “banished” in a sense from their castle.

That being said, this theory is based on the fact or idea that the curse was not properly lifted at the end of Beauty and the Beast. At the end of the film, we do see all of the objects return to their former servant selves, which leads viewers to believe the curse is broken, and we have no evidence to think that it was not, which is where the theory gets tricky for me.

I do think that the castle itself, however, may have remained cursed for whoever took it on next, and perhaps if others, such as Ursula, had similar qualities to the Beast and went near it, they too would find themselves with a form of a curse. That being said, of course, this is purely speculation.

Do you think that The Little Mermaid and Beauty and the Beast could be related?