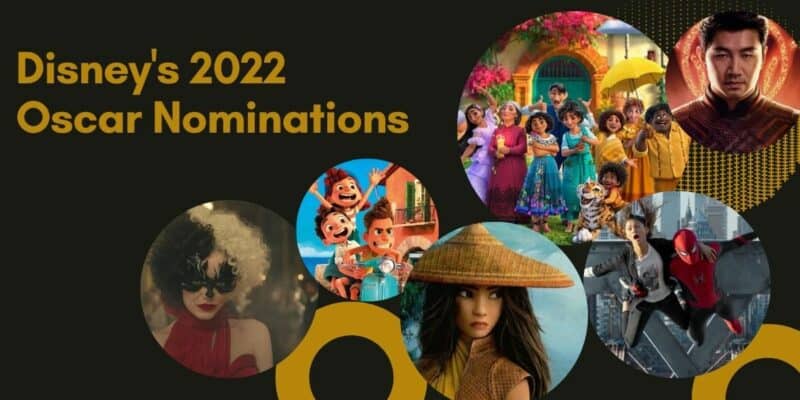 Ready your acceptance speeches! Disney’s live-action and animated film divisions have made a big stance in the 2022 Academy Award Nominations. Hopefully, they will bring home a few Oscars. From Disney’s latest smash hit, Encanto (2021) to the early 2021 release, Cruella, Disney’s Oscar nominations range from music to costume design. Let’s see everything they might win!

Disney presented with official nominations in several categories. On the morning of Tuesday, February 8, 2022, the official nominations were released and reported by Variety magazine. While Disney doesn’t, of course, have Oscar nominations in every category, the representation is a force to be reckoned with. In the category of Best Costume Design, the early 2021 Disney+ hit, Cruella, represents Disney against other films like Cyrano and Dune. Cruella also has a chance at
Best Makeup and Hairstyling, which was handled by Nadia Stacey, Naomi Donne, and Julia Vernon.

The Best Original Score category of course includes the earworms in Disney’s Encanto (2021) by Germaine Franco, as the score of the entire film was nominated. Encanto also ropes in a single nomination for Best Original Song. “Dos Oruguitas” in Encanto by  Lin-Manuel Miranda makes the list, but the fan-favorite “We Don’t Talk About Bruno” wasn’t put forth by Disney as an Oscar Submission because it was a sleeper hit. 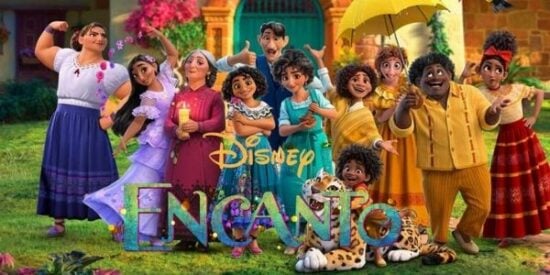 Of course, Encanto also brings in the nomination for Best Animated Feature Film, as the animated feature has been huge in both theaters nationwide and at home on the Disney+ streaming service. Disney ought to be proud of itself, though, as Luca (2021) and Raya and the Last Dragon (2021) are also included in this nomination category.

While Marvel’s  Spider-Man: No Way Home (2021)  is not nominated for Best Picture, Disney fans will find it among the titles listed for a nomination in Best Visual Effects. Movies such as Dune (2021),  Free Guy (2021),  and No Time to Die (2021) also compete against the top-performing superhero film. Disney will have two total nominations in the Best Visual Effects category, as Shang-Chi and the Legend of the Ten Rings (2021) appears here, as well.

You can catch all these Oscar-nominated films on the Disney+ streaming platform or in theaters (Spider-Man) near you. We’re excited to see what Disney will win this year, at the Oscars as well as other award shows like the Emmys (television-based) or perhaps the Tonys (theatre-based).

Do you think any 2021 Disney films are missing from the 2022 Academy Award Oscar nominations? Leave us a comment below!

Comments Off on Disney’s Films Rake in 2022 Oscar Nominations