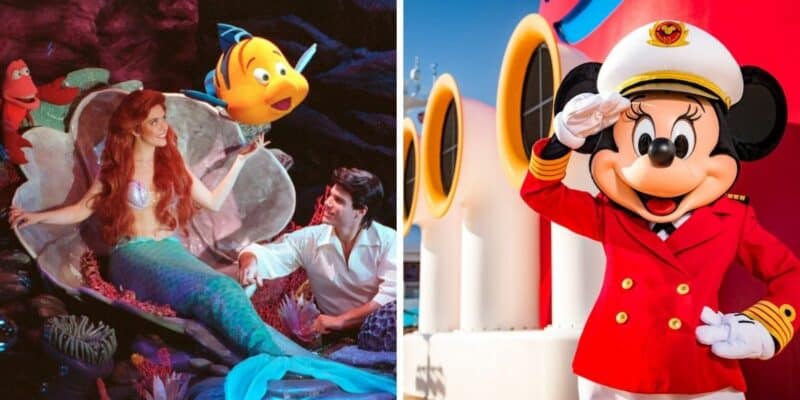 At Destination D23, it was announced that two brand-new Broadway style shows will be featured on Disney Cruise Line’s newest ship, Disney Wish.

Disney Wish will debut two new shows — Disney Seas the Adventure, featuring Captain Minnie, and Disney The Little Mermaid, a modern and innovative take on a young girl learning the power of her voice.

Attendees at Destination D23, or watching via live-stream, also had a special sneak peek of Disney The Little Mermaid!

These two new Broadway-style shows will join the previously announced Disney’s Aladdin – A Musical Spectacular, which will reimagine and enhance the classic show we know and love.

All of these Broadway-style shows will be at The Walt Disney Theater, which is designed to look like a magical forest straight out of a storybook or fairy tale.

D23 also shared the following information regarding the upcoming shows:

While we’ve already heard about the delicious offerings and relaxing opportunities heading to the newest ship in the Disney Cruise Line fleet, the Disney Wish, which sets sail for the first time this summer, today we learned about two new shows premiering on the ship in the Walt Disney Theatre: Disney The Little Mermaid and Disney Seas the Adventure. Disney The Little Mermaid reimagines the Walt Disney Animation Studios classic with a modern and innovative take on a young girl learning the power of her voice. The show will feature dazzling special effects, innovative theatrical design, artistic choreography, and a reimagined script and score that will surprise and delight guests of all ages. Seas the Adventure follows Goofy as he discovers his own inner captain with the help of Captain Minnie and an all-star cast of Disney and Pixar characters.

Inside the Magic will update you as we get more information regarding what cruisers can expect aboard the Disney Wish.

Earlier this year, fans of Disney Cruise Line had the chance to experience a “cutting edge virtual event” titled Once Upon a Disney Wish. During the event, we found out much more information surrounding the new Disney ship, the Disney Wish, including:

Are you going to set sail on the Disney Wish? Let us know in the comments below.

Do you want to plan a Disney Cruise Line vacation? Get started today!