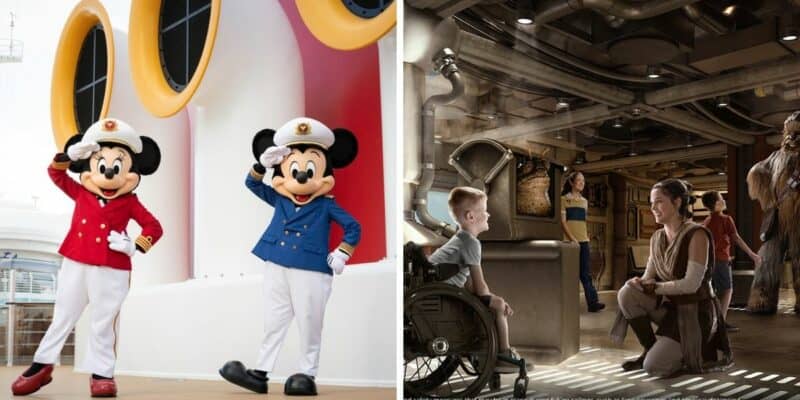 Today, Disney announced some imaginative and adventurous new experiences coming to life for kids onboard the newest ship in the Disney Cruise Line fleet, the Disney Wish!

In an article just published by Disney Parks Blog, there are even more details about the experiences for kids onboard the Disney Wish throughout Disney’s Oceaneer Club. We have already shared so much of what the Wish has in store for young Disney fans (like the very first Disney attraction at sea!), but these adventures themed after Star Wars and, of course, Captain Minnie Mouse are surely things to get excited about.

The youngest passengers in Disney’s Oceaneer Club will love Minnie Captain’s Deck. This is a delightful playground that harnesses the magic of Disney Cruise Line in an all-new space. Here, kids can even play with Mickey Mouse and Minnie Mouse!

Below you can read more about this new offering for kids, including Minnie’s Captain Academy, which your little ones will truly love.

Specially designed for the youngest sailors at Disney’s Oceaneer Club, Mickey and Minnie Captain’s Deck is a nautical playground inspired by the colors, icons and magic of Disney Cruise Line. This brand-new space will be filled with an array of maritime-themed physical and sensory-style games and activities, such as pipe slides and crawl-throughs, ship’s wheels, “busy boxes” fashioned as ship controls and cushy life preserver seating areas.

When little cadets enter the space, they’ll set sail on a fun-filled adventure and enjoy quality play time with Mickey Mouse and Minnie Mouse themselves. At select times throughout the voyage, the space will be open to little ones’ families for group play, and the toddlers from It’s a Small World Nursery will also get dedicated access to the club to explore, learn and play with Mickey and Minnie.

The signature experience will be “Minnie’s Captain Academy,” a high-energy training session for kids to exercise their bodies (through playful games, dancing and maritime “drills”) and their minds, testing their imagination and ingenuity during a series of challenges tied to STEAM principles (science, technology, engineering, arts and mathematics). Captain Minnie will inspect their progress and officially declare them honorary captains!

At Star Wars: Cargo Bay, kids will get to take part in a first-of-its-kind immersive experience in which they are “creature handlers” managing exotic beings from across the galaxy. But at one point, as in all intergalactic adventures, something goes wrong. So, they will call on the help of Rey and Chewbacca to save the ship. May the Force be with you!

Below is what Disney said about the new Star Wars offerings for kids:

The peculiar creatures and legendary characters of the Star Wars galaxy will take center stage at Star Wars: Cargo Bay. This first-of-its-kind immersive experience will place kids in the important role of creature handlers as they learn to manage a mischievous menagerie of exotic beings from across the galaxy, including a porg, Loth-cat, worrt and more.

Throughout the cruise, they’ll use augmented reality-enabled datapads to track and study the creatures on a series of special assignments. But there’s more to this job than meets the dianoga eye: The new crew will actually be joining an important mission to deliver a pair of secret stowaways, Rey and Chewbacca, back to the Resistance.

During the interactive “Star Wars: Creature Challenge” experience, the newly minted caretakers will be put to the test as they help feed the lifelike creatures and encounter some of the most dangerous beings in the galaxy. When things go awry, they’ll need to call on the expertise of Rey and Chewbacca — and even channel the Force — to secure the ship from destruction.

More details on the Disney Wish continue to be revealed, and we’ll keep sharing them with you all! As bookings are already open for sailings onboard the Wish, we recommend visiting the official website for more information.

There truly is so much to enjoy for all ages on the new Disney Cruise ship, the Disney Wish, sailing out of Port Canaveral, Florida, and taking passengers to breathtaking tropical destinations, including Disney’s private island in The Bahamas, Castaway Cay. The Wish sets sail in 2022 — read all about this cruise ship (including how to book!) here!

Do you plan to sail aboard the Disney Wish with your family? Which of these new kids experiences do you think your children will love most? Let us know in the comments!