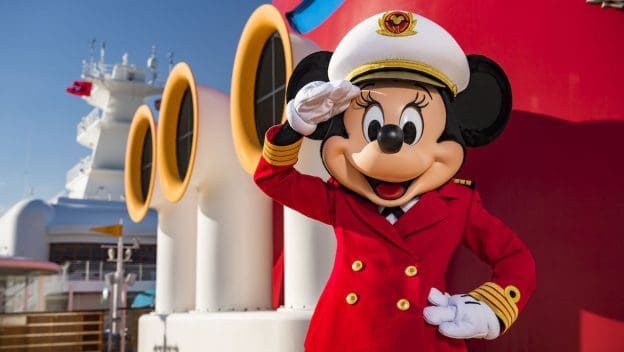 The fifth and newest ship in the Disney Cruise Line Fleet, the Disney Wish, is making its grand debut in summer 2022, and dedicated DCL fans and Castaway Club members couldn’t be more thrilled.

Disney continues to release more details about what passengers onboard the Disney Wish can expect from this innovative Disney Cruise ship, from the first-of-its-kind AquaMouse, a Disney attraction at sea, to amazing dining opportunities for the whole family (including restaurants themed to Frozen and Marvel, and even a Star Wars lounge for adults!),

A new experience coming to the Disney Wish that was just announced today is called Disney Uncharted Adventure, which uses imagination and technology to take Disney interactive experiences into a “multi-dimensional adventure” alongside their favorite Disney and Pixar characters. It will be integrated into the Play Disney Parks app to allow Disney Wish passengers to become part of a story at sea.

So, how does the story start? Well, with the wishing star, of course! “When You Wish Upon a Star” is a tune Disney fans know and love, and that wishing star is truly where the story begins.

But you get to begin your adventure before you even board the ship! Guests can access the Play app on their mobile phone, and within the app they will be greeted by Captain Minnie and, of course, Mickey Mouse, who will give them a prelude to their vacation and provide them with a powerful, magical spyglass within the app. This spyglass within the app will show Guests some beautiful constellations that cannot be seen with the naked eye!

Guests will use a mobile device to experience interactive quests and help their favorite Disney characters on a mission to be the heroes of the Disney Wish.

So far, Disney has announced four quests (featuring the stories of Moana, Finding Nemo, The Princess and the Frog, and Peter Pan), but more could be introduced in the future.

Once on board, you will use your spyglass to reveal never-before-seen views of the stars above, where enchanted constellations take shape as recognizable icons from Disney and Pixar stories. When the wishing star suddenly bursts and shatters, you’ll watch as its pieces are scattered across the sky, each landing in a far-off realm. Captain Minnie will need your help to navigate the ship to these uncharted worlds to find the missing pieces of the wishing star!

You will choose where to go next, charting a course toward adventurous locales such as Motunui, New Orleans, Never Land, Sydney and more. Each quest will take you on an expansive journey throughout the Disney Wish as you are prompted to seek artwork, signs and props that magically transform to bring the characters and settings of these story worlds to life all around you.

Along the way, you will join the heroic characters who inhabit each destination on a mission to find the star fragment that landed there. Highlights include:

Watch the video below!

After all of the quests, there will be a grand finale moment that takes place on the ship for all of the families who have participated in the interactive experience (whether they have completed all of the quests or not). The event will be an “epic battle between good and evil” and will end the experience with a bang, giving families the opportunity to see themselves bringing the Disney Wish to life and become the heroes of the cruise.  This is a special, one-time event toward the end of the cruise sailing.

A “Heads Up” Experience

Technology will be used in new, innovative, and exciting ways onboard the Disney Wish. Guests who have experienced past cruises likely remember the interactive experiences on the other ships, but the Wish will offer so much more!

Walt Disney Imagineering wants Disney Uncharted Adventure to be a “heads up” experience. This means that even though you will use your mobile phone to participate in the adventure, your phone — or, really, your spyglass — becomes a tool for your quests. However, the experience is truly happening on the ship itself all around you, and you will not have your eyes glued to your phone screen while playing the games and completing the quests.

One person in your family or travel party will need a smartphone in order to access the Disney Parks Play app, but not everyone in your group needs a phone to play. Up to six people can play together, but you can choose how many spyglasses (AKA phones) to bring into the experience. So, only one phone is needed, or you can use multiple. Overall, the Disney Uncharted Adventure experience is designed to be played together.

More About the Disney Wish

Disney Cruise Line’s newest ship, the Disney Wish, sets sail on its maiden voyage in summer 2022. It will feature imaginative and cinematic dining offerings, interactive experiences unlike anything else in the Disney Cruise Line fleet (which currently includes the Disney Dream, Disney Magic, Disney Fantasy, and Disney Wonder), and so much more. Sailing out of Port Canaveral in Florida, itineraries will, of course, offer stops at Castaway Cay, Disney’s first private island in the Bahamas.

Per the official Disney Cruise Line webpage for the new ship:

Are you hoping to set sail on the Disney Wish after it makes its maiden voyage in summer 2022? Click here to book the most magical DCL vacation and share your Disney Cruise memories with us in the comments!