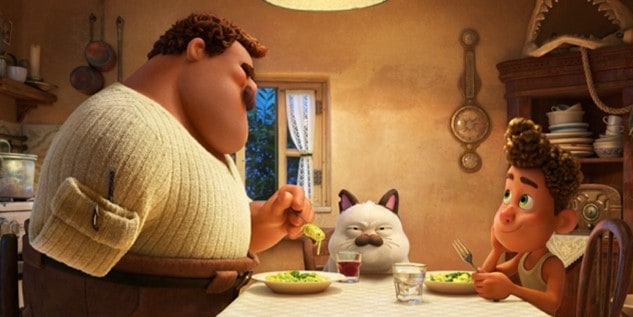 Disney+ Day has arrived and we’re cozied up on the couch watching all sorts of new series and films Disney has released for their Disney+ subscribers. As Disney+ celebrates its 2nd anniversary, we benefit with a brand new Disney Pixar short called Ciao Alberto that in our opinion is a Disney+ Day success!

Remember the summer film, Luca? How could we forget! In June 2021 Disney+ released the Disney Pixar film, Luca, and we’ve been fans ever since. Set on the Italian Riviera in a town called Portorosso, the film follows the story of Luca, a young sea monster boy. When Luca goes on land, however, he turns into a human form. He meets a new best friend named, Alberto Scorfano (who is also a sea monster) and they experience a life-changing summer adventure. Along the way, the sea creatures by water and humans by land, meet a girl named Giulia and who lives with her father, Massimo. The three become the best of friends. The movie ends with Luca and Giulia going off to school while Alberto stays in town. BUT… WAIT! Whatever happens to Alberto? Well, the new short film, Ciao Alberto, tells us about his new adventure which includes Giulia’s father, Massimo.

Ciao Alberto is a fantastic short film that helps us feel like the loose ends of the Luca film are somewhat tied up! Although the short film doesn’t give us a look at how Luca and Giulia are doing in school, we do get to see Alberto and his new friendship with Massimo.

In Ciao Alberto, we see Alberto is enjoying his new life in Portorosso working alongside Massimo—the imposing, tattooed, one armed fisherman of few words—who’s quite possibly the coolest human in the entire world as far as Alberto is concerned. He wants more than anything to impress his mentor, but it’s easier said than done. In this one short film, we feel all sorts of emotions from laughter to love and more!

Directed by McKenna Harris and produced by Matt DeMartini, don’t wait to experience the Pixar Animation Studios’ Ciao Alberto which has officially launched exclusively on Disney+ as of Friday, November 12, 2021. Did you miss the official trailer? Check it out below:

Did you enjoy Ciao Alberto as much as we did? Let us know in the comments!