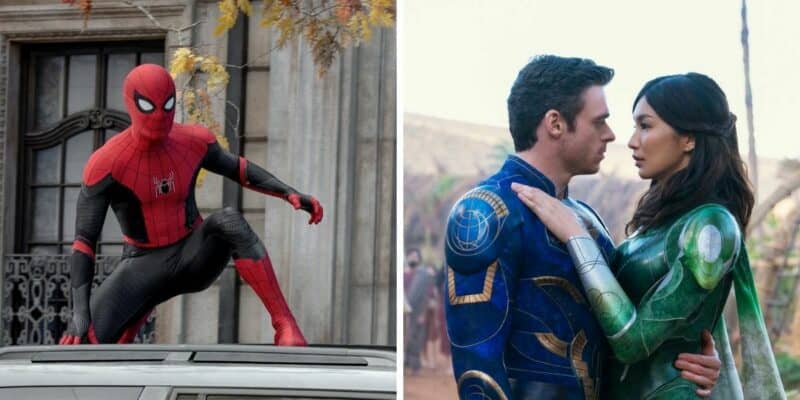 Disney and Marvel Studios broke records this year at the movies, even during a pandemic.

We’ve previously seen Marvel’s Disney+ television shows get award nominations, with WandaVision receiving nods from the Grammys and Golden Globes, and now Marvel is pushing heavily for recognition from the Academy Awards after many years of snubs in the nominee lists.

Marvel’s five 2021 films took 30% of the total box office sales in the United States last year, beating 400 other movie releases. But, are they Oscar-worthy? Disney certainly thinks so.

Marvel Studios last year gave fans some incredible cinema moments. From the eagerly-awaited release of the delayed Black Widow to the cheer-inducing surprises of Tom Holland’s Spider-Man: No Way Home, Marvel made history with its blockbuster superhero adventures.

Previous Marvel films Black Panther (2018) and Spider-Man: Into the Spider-Verse (2018) were previously nominated for the Best Picture Oscar, but both unfortunately lost. Could Eternals, Shang-Chi or No Way Home be Marvel’s ticket to win the studio its first Best Picture Academy Award?

According to Comic Book, Disney and Marvel Studios are building an Academy Awards campaign in support of Eternals, Shang-Chi and the Legend of the Ten Rings, Black Widow, and Spider-Man: No Way Home, leaving Marvel to be competing heavily with itself.

Most significantly, Marvel’s campaign is pushing hard in the Best Picture category, especially for Eternals. The controversial superteam introduction has suffered from mixed reviews and a relatively disappointing box office. At one point, Chloe Zhao’s movie dropped into the “Rotten” territory on review site Rotten Tomatoes but at the time of writing, the new Marvel film is sitting at 78%.

Usually, superhero movies only get consideration at the Oscars in the technical categories. Of course, Heath Ledger won Best Supporting Actor for The Dark Knight (2008), and Black Panther earned a Best Picture nomination in 2019, but this year, Marvel is vying for nods in multiple categories – including acting.

All of the ensemble cast of Eternals – Gemma Chan as Sersei, Richard Madden as Ikaris, Kumail Nanjiani as Kingo, Lia McHugh as Sprite, Brian Tyree Henry as Phastos, Lauren Ridlof as Makkari, Barry Keoghan as Druig, Don Lee as Gilgamesh, Kit Harrington as Dane Whitman, Salma Hayak as Ajak, and Angelina Jolie as Thena – have been entered into the campaign in the acting award categories.

The studio has also placed Shang-Chi and the Legend of the Ten Rings up for every single eligible award for 2021 as Disney enters the movie into consideration for 14 Oscar categories, including Simu Liu for Best Actor and Awkwafina for Best Supporting Actress.

It was recently revealed that Kevin Feige is already working on a sequel for the debut of the Asian superhero Shang-Chi, starring Simu Liu. The movie follows Shang-Chi as he confronts the past he thought he left behind when he is drawn into the web of the mysterious Ten Rings organization. The film also stars Tony Leung as Wenwu, Awkwafina as Shang-Chi’s friend Katy and Michelle Yeoh as Jiang Nan, as well as Fala Chen, Meng’er Zhang, Florian Munteanu and Ronny Chieng.

Black Widow is also getting an Oscars campaign, in spite of Scarlett Johansson’s infamous Black Widow lawsuit — which reportedly “embarrassed” Kevin Feige and made him “livid” at Disney — and pirating issues that affected streaming films.

Disney has officially launched its “For Your Consideration” campaign for the delayed superhero movie, revealing it is actively pushing Johansson for a Best Actress nomination at this year’s Academy Awards.

Marvel’s campaign in support of Tom Holland’s Spider-Man: No Way Home has been been widely supported by fans, with the multiversal movie skyrocketing to the top of the box office on its December release.

The movie has been well received by critics and audiences, scoring the #9 spot on IMDb’s Top 10 with a 9/10 rating and earning over 25,000 five-star reviews from fans (making it the highest scored Rotten Tomato film in history). Tom Holland has also been praised for his performance as Peter Parker, with fans loving the character’s development during Jon Watts’ trilogy.

Marvel and Sony are campaigning for the Spider-Man movie to earn the Academy Award for the Best Picture, using some of its massive $1.37 billion box office income to fund the campaign.

Kevin Feige previously campaigned for Avengers: Endgame (2019) and Robert Downey Jr. at the Oscars, submitting entries for 13 categories and only receiving one nomination for Best Visual Effects. We wonder if the Marvel Academy Award curse will continue in 2022, or whether one of 2021’s hit movies can help the studio win its first Best Picture Oscar.

Marvel’s Eternals will begin streaming on Disney+ on January 12th, while the full list of nominees for the Oscars 2022 will be announced on February 8. The main ceremony will be held on March 27.

As for the Marvel Cinematic Universe, the highly anticipated Doctor Strange In the Multiverse of Madness is set to hit theaters on May 6, 2022 with Taika Waititi’s Thor: Love and Thunder following on July 8, 2022.

What Marvel movies and actors do you think should be nominated for an Oscar? Let us know in the comments.