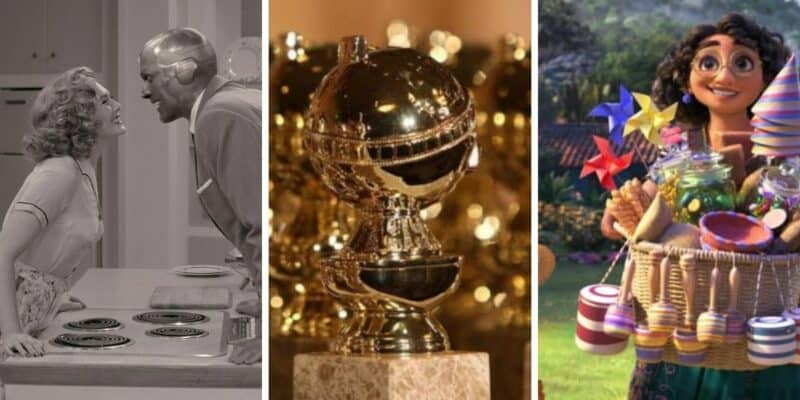 Just when you think Disney had filled its awards cabinet, the Golden Globes swoops in with their 2021 nominations.

Last month, it was “Agatha All Along” getting award nominations, and now, the MCU’s Wanda and Vision are getting some love instead.

The Hollywood Foreign Press Association (HFPA) announced the nominees for the 79th Annual Golden Globe Awards this week, and Disney has over a whopping 30 nominations across its studios, with some surprises and shocking snubs.

Disney has had its fair share of awards over the years, with Walt Disney himself holding the record for most Academy Awards earned by an individual. The Disney Company founder won 22 Oscars from 59 nominations and was also presented with two Golden Globe Special Achievement Awards and an Emmy Award.

This week, the Golden Globe Award nominations were announced despite the HFPA still facing criticism of its ethical practices and lack of diversity.

NBC dropped the famous awards show from its schedule due to the ongoing scandals, and a number of celebrities have said they will avoid working with the HFPA or appear at the Globes until the issues are resolved.

The newest release on the list, Steven Spielberg‘s West Side Story (2021) picked up 4 nominations, including Best Director, Best Motion Picture for a Musical or Comedy, Best Actress for Rachel Zelger, and Best Supporting Actress for Ariana DeBose.

Both Hulu/Star Originals Dopesick and Only Murders In The Building were nominated for 3 awards each, including Best Actor nominations for Martin Short and Steve Martin.

Pose, Impeachment: American Crime Story, and Reservation Dogs on FX were nominated, with Poses‘s Billy Porter getting a nomination for Best Actor in a Television Series.

Over on ABC, Black-ish gained a Best Actress nomination for Tracee Ellis Ross, while National Geographic’s Aretha was also nominated for an award for actress Cynthia Erivo.

Pixar’s Luca (2021) and Disney’s Raya and the Last Dragon (2021) join Encanto in a tough competition for Best Animated Motion Picture.

The French Dispatch,  The Eyes Of Tammy Faye, and Cruella (2021) also get a nomination, with Emma Stone nominated for Best Actress in a Musical or Comedy.

Of course, Marvel Studios’ WandaVision on Disney+ got nominated for two awards – Paul Bettany for Best Performance by an Actor in a Limited Series, and Elizabeth Olsen for Best Performance by an Actress – but Agatha actress Kathryn Hahn was surprisingly snubbed. Marvel’s first Disney+ show also missed out on a Best Television Limited Series or Motion Picture Made for Television nomination

MCU fans were outraged when HBO’s Mare of Easttown actress Julianne Nicholson won Outstanding Supporting Actress in a Limited or Anthology Series or Movie instead of WandaVision‘s Kathryn Hahn for her role as fan-favorite villain Agatha Harkness.

The Golden Globe Awards will be held on January 9, 2021, with a broadcaster yet to be determined.

What do you think of this year’s Golden Globe Award nominations? Do you feel like anything was snubbed?