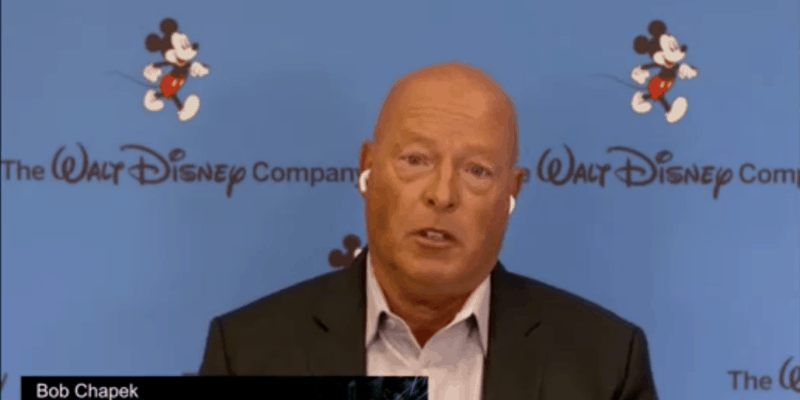 Bob Chapek has become quite the divisive CEO at The Walt Disney Company.

With a petition going viral recently trying to persuade the Walt Disney Company to fire Chapek, the Disney head has become quite a continued topic of discussion among Disney Guests.

With Disney fans discussing Chapek’s focus on budget cuts and layoffs, as well as moving attention to Disney+ and away from the quality of the Disney Parks, Chapek has now revealed he dislikes this “bean-cutter” reputation he has gained as Disney CEO.

Chapek did not have it easy to begin with as CEO, starting just before the COVID-19 pandemic and making difficult decisions throughout, including budget cuts and laying off 28,000 Cast Members, a focus on Disney+, the closures of Walt Disney World, Disneyland Resort, Disney Cruise Line, and Disney Parks across the globe, as well as a high-profile lawsuit.

In late July, Black Widow star Scarlett Johansson sued The Walt Disney Company, claiming that the studio giant had breached its contract with her when it released Marvel’s Black Widow in theaters and on Disney+ at the same time. Disney fought back and called the lawsuit “callous”.

According to Johansson and Disney, the sides have amicably settled their lawsuit and will continue working together on future projects, including Johansson’s highly-anticipated Tower of Terror movie.

Bob Chapek’s role as CEO of the beloved Walt Disney Company follows a 15-year tenure from Bob Iger, who is currently acting as chairman to help guide Chapek through the transitional period. Iger will be ending his Disney employment at the end of this month, and Chapek will be on his own.

During a recent annual retreat for the company’s upper management at Disney’s Aulani Resort in Hawaii, Iger seemed to hint at the data-driven nature of Chapek. Iger spoke about his advice on successfully being the CEO of The Walt Disney Company and not to let data control their decision, but rather, creativity.

This reputation as being data-driven is resented by Chapek, who revealed in a piece by the Financial Times that the notion of him as “an outsider, a number-cruncher, a cost-cutter” in comparison with his predecessors Bob Iger and Michael Eisner – who were viewed as “creative people at heart.” – “irks” the new CEO.

The interview with the Financial Times covers Chapek’s time as CEO of the Walt Disney Company, detailing his career and journey to the top.

According to the interview, Chapek’s rise to CEO as an “unknown” in the industry” “worries some actors, directors, and agents in Hollywood.”, especially with his drive to focus on Disney+, Disney’s streaming service.

The Financial Times comments on Chapek’s resentment of those who think he is not creative:

The notion that he is merely a bean-counter irks Chapek. “I’ve seen creativity in this company through every lens possible,” he says in an exclusive interview. He compares running the theme parks with observing “a focus group every day” that gave him a unique perspective on “what makes the Walt Disney Company so different from any other media company”. He adds, “It ties us to our ultimate constituent, which is the consumer.”

Further comments by executives at Disney reveal his reputation within the company itself. A former entertainment executive at Disney said that Chapek is seen as “very operational” in the company, while Rich Greenfield, an analyst at LightShed Partners, said that the Disney CEO “is not a visible person.”

One former executive claims that since Chapek became CEO, Disney has “became a club where the old members reasserted themselves. The only qualification they had was they had to have been around for 30 years at Disney and nowhere else.”

Of course, we recently reported how Chapek has been restructuring the company, hiring former BP executive Geoff Morrell as Chief Communications Officer, while former Procter & Gamble executive Susan Arnold will replace Iger as Chairman of the Board.

And adding to the reports from the annual treat at Disney’s Aulani Resort, the piece by Financial Times revealed that Bob Iger apparently expressed worry that “the company was changing and he was concerned by the lack of innovation, the lack of strategy.”

Chapek’s focus on the consumer has also reportedly caused a rift between the magic and revenue of Disney movies, the Financial Times writes:

This tension has boiled over into a conflict over the two things people in Hollywood care about most: the magic of movies and the colour of money.

The article from The Financial Times does, however, highlight Bob Chapek’s enjoyment of the Disney Parks, with Chapek enjoying a day at Disneyland:

He knows this place intimately and, despite years of dealing with the crises and headaches that come with running some of the most scrutinised attractions on earth, it is clear Chapek still feels the Disney magic. He lets out whoop-whoops on a Cars Land ride, devours an enormous corn dog on a stick and recites the safety instructions for Soarin’, a multisensory ride that is among his favourites, along with the narrator. “I must have seen this 60 times,” Chapek says of the tongue-in-cheek video, “but it still gets me every time.”

It’s interesting to see the Chapek is just like us, and can recite Patrick Warburton’s introduction video on Soarin’, the popular attraction found at EPCOT and Disney’s California Adventure theme park.

Iger is currently acting as chairman to help guide Chapek through the transitional period. Iger will be ending his Disney employment at the end of 2021, and Chapek will be on his own.

Bob Iger was a beloved and successful CEO at the Walt Disney Company, steering Disney through acquisitions of Lucasfilm, Pixar, Marvel Studios, and 21st Century Fox to become the giant entertainment company it is today.

Iger will be replaced as chairman of the board by longtime board member, Susan Arnold, and he recently took to presenting the weather on ABC in a fun interview.

Before he was CEO, Bob Chapek was Chairman of Disney Parks, Experiences and Products, leading Disney’s travel and leisure businesses such as Disney Cruise Line, Adventures by Disney, and Disney Vacation Club, as well as Disney’s Global Consumer Products Operations.

While Chairman of Disney Parks and Resorts, Chapek oversaw a massive expansion for Disney Parks worldwide, including the opening of Shanghai Disney Resort, the expansion projects of Disneyland Paris and Disneyland Hong Kong, and the announcement of Star Wars Galaxy’s Edge at Walt Disney World and the Disneyland Resort. Chapek is also credited as the reason more Disney IPs are being incorporated into the Parks.

We’ll have to wait and see what Chapek brings to the Walt Disney Company now that the Parks are reopening, Disney+ has the MCU’s Hawkeye launching every Wednesday, and Disney Genie+ has launched in both Disneyland and Walt Disney World.

What do you think of Bob Chapek and his vision for the Disney company? Let us know in the comments.