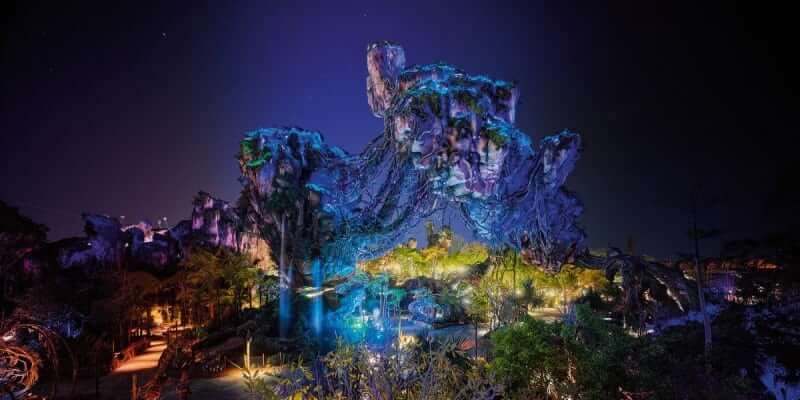 Theme Park enthusiasts everywhere will tell you how they did, do, and always will love Disney’s Animal Kingdom theme park. However,once upon a time, Disney Guests declared Animal Kingdom as an infamous “half-day park,” inciting yawns from the thrill-seeking crowd. Animal Kingdom’s Guests could encounter Expedition Everest, which was a step in the right direction for thrill-seekers back when it opened in 2006. Animal Kingdom fans clamored for more and though the thrill had something to do with it, I would argue that the theme was even more important. Here’s how Pandora saved Disney’s Animal Kingdom, making it the park we love today.

When Animal Kingdom opened in 1998, it was meant to debut with a section known as “Beastly Kingdom.” This land would have been chock full of dragons, unicorns, and other mysterious – and fictitious – creatures. The elusive “Beastly Kingdom” never made it from plans to park. Yet, the idea was still worth considering for fans of fantasy, which is right on par for we “Disnerds.” Even though Everest and its Yeti were fierce, they were not exactly an all-encompassing solution to Animal Kingdom’s half-day stigma. Animal Kingdom evolved, but it had not yet reached a stasis that would satisfy its need for overwhelming entertainment. Though Animal Kingdom dipped its paw in the water with Everest’s Yeti, it had not yet created a land that would be based on legend: Pandora.

When Pandora was announced as an expansion that would replace the beloved – though somewhat neglected – Camp Minnie-Mickey, loyal park-goers were less than thrilled. Some shouted in outrage, “What?! How will the Na’vi fit in with the beautiful tigers of Asia?!” Others exclaimed, “Animal Kingdom is meant to be authentic, not fantasy!” Some of these fans may not have recalled the original plan for “Beastly Kingdom.” Perhaps, others did not appreciate the idea of this fantasy land of animals in the first place. Maybe they feared that if another company’s IP were integrated into the park, it would be taken away. After all, Disney has recently closed The Great Movie Ride at Hollywood Studios in Pandora’s opening year of 2017.

Joe Rohde reassured Disney park goers in an interview with ABC News. He said, “What happens in Animal Kingdom is your story and when you think about those values, they are the same ones that sit under the movie Avatar.”

Joe Rohde, once again, understood the pulse of Animal Kingdom and delivered on this promise. Pandora added Avatar Flight of Passage, which satisfies thrill-seekers and families alike. Yet, it also gives a peaceful tribute to the beauty of nature in Avatar Na’vi River Journey. Animal Kingdom’s nightlife migrated in a whole new direction, with bio-luminescent plants and gorgeous views of the illuminated Hallelujah Mountains. The Pandora park loop (now available on soundtrack) immerses Guests into the experience, giving the feeling that one truly stepped into the Na’vi’s home.

Pandora infused the park with a new culture that seems separated by distance, yet united by the majesty of nature. Anxious fans may have worried that Avatar’s movie rights would expire when Pandora was announced. However, Disney has now acquired the franchise as deeply as the Star Wars franchise, and are currently planning Avatar’s sequels. Animal Kingdom Guests can explore new areas, restaurants, rides, and entertainment, which gave Animal Kingdom the extra interest it deserves. Though not as educational as EPCOT, Animal Kingdom offers Guests the opportunity for learning experiences. These experiences pair with ample entertainment options that are subtly educational. Pandora saved Animal Kingdom and its longevity as a beloved, entertaining park.

So, next time you are in Animal Kingdom, see a tiger, climb a mountain with a yeti, and “Sivako” (rise to the challenge) by flying with a banshee across the beautiful landscape of Pandora. Don’t forget to thank those Imagineers who suggested that fantasy belongs at Animal Kingdom, paired with the magic of nature.

If you want to visit Pandora: The World of Avatar but don’t know where to start, our friends over at the Authorized Disney Vacation Planners at Academy Travel can give you a free quote on your dream vacation to Walt Disney World Resort.