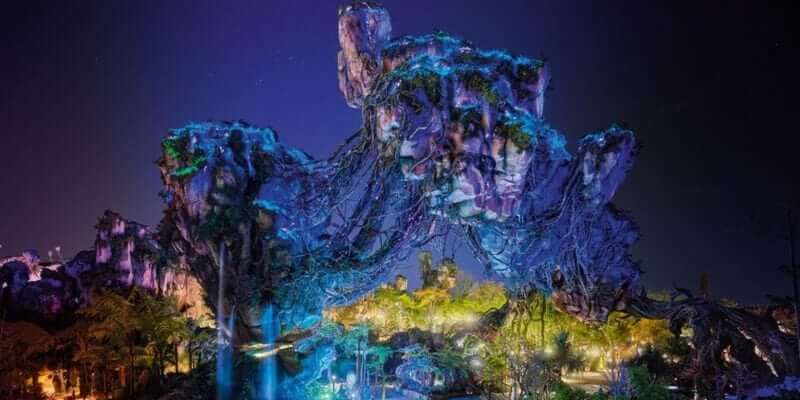 Since Disney’s Animal Kingdom first opened nearly 20 years ago, it’s often been seen as Walt Disney World’s half-day park. But that will most certainly change when Pandora – The World of Avatar debuts on May 27, as this new expansion is among Disney’s most impressive new nighttime sights.

The transition between day and night in Pandora is staggering. If daytime in this new land is likened to a peaceful nature walk under floating mountains and gorgeous waterfalls, nighttime is an enlightening expedition through another planet that provides a steady stream of surprises around every turn. While the park’s new Rivers of Light lagoon show is charming and well worth seeing, it doesn’t come close to evoking the emotional response that stepping into Pandora after dark for the first time will achieve.

This weekend, Walt Disney World granted ITM access to be among the first to step into Pandora after dark – long before Imagineers have even finished lighting the land. Its complex system of bioluminescent plants is still in the works, but we were given a preview that allowed us a great sense of the impressive direction it’s headed in the weeks ahead.

According to Walt Disney Imagineer Joe Rohde, who led a tour through the land along with “Avatar” producer Jon Landau, Pandora’s transition into the evening is one that should be felt deeply. “We want the guest to move from a stark sense of awe during the day into a softer sense of wonder in the evening,” said Rohde. In words, this seems like a difference of mere degrees; however, when in the middle of the land, his meaning couldn’t be more clear.

During the morning hours the grand mountains, the serene waterfalls, and the odd sights all around make your jaw drop. In the evening, however, something else happens. Instead, of the striking backdrop of floating boulders, all emphasis is on the soft glow of nature and a more gentle notion of admiration. It is primarily felt in the vegetation. Each plant is connected to a bioluminescent system within Pandora. This means that it all acts as a unit, evolving throughout the evening as if playing different movements in a visual symphony.

The lighting is low throughout the land with little other than the illuminated flora and some dimly-lit lamps. As we found out, this is done purposefully. “Avatar” producer John Landau explained it as the preservation of realism. “The more lit the area is, the further we get from what a real experience in the bioluminescent forest would be,” expressed Landau. The effort that was made to create Pandora as a real world becomes obvious if you take a moment to listen to the sounds of the land, especially in the evening. I would like to tell you that it is entirely peaceful, but the truth is that the effects are so realistic, they are slightly unnerving. Wild animals call to one another from beyond the bushes. Sometimes the noises are near. Sometimes they are far. The one constant is that they are always changing in position and in nature.

You may hear the soft cooing of one species and the rustle of bushes as the animals pass by. Then moments later you may hear another nocturnal species calling to one another from opposite sides of the walkway you are on. In the distance, a horn might be signaling a tribe and is then answered by some drums. The entire area is an amazing surround sound system of “wonder” that captivates and unnerves at the same time. The difference between fascination and intimidation is a fine line, but it is a line that Pandora walks successfully during its evening hours. A primary example of this would be the Flaska Reclinata, a large and intimidating bit of flora placed near the entrance of the land. This plant is beautiful but also somewhat terrifying and might make Audrey II (“Little Shop of Horrors”) go running for the hills. The large pod glows in places that are meant to be interactive for guests. The soft color can be hypnotizing and easily lures people to its side; however, once the plant is touched repeatedly by multiple hands, the plant spews a mist that drops seedlings and makes a snarling sound that may make you second-guess putting your hands on it. But you will still put your hands on it, and then you will do it again.

Ultimately, it all circles back to that word “wonder.” If this was what Imagineering is going for, they seem to have nailed it – even in this early preview. We can only imagine the spectacle that will be the floating mountains when they are fully illuminated in their bioluminescent glory – which we are told will have an animated element to it.

There is true sense of surprise that is tied up in an admiration of the inexplicable. It’s not something that can be entirely captured in photo or video. This must be experienced in person to fully grasp the nature of what has been accomplished here.

Fortunately for guests planning on visiting Walt Disney World when Pandora – The World of Avatar opens next month, Disney has already announced extended park hours to allow plenty of after-dark exploration, open until 1am through July 4th.

Get your cameras ready.