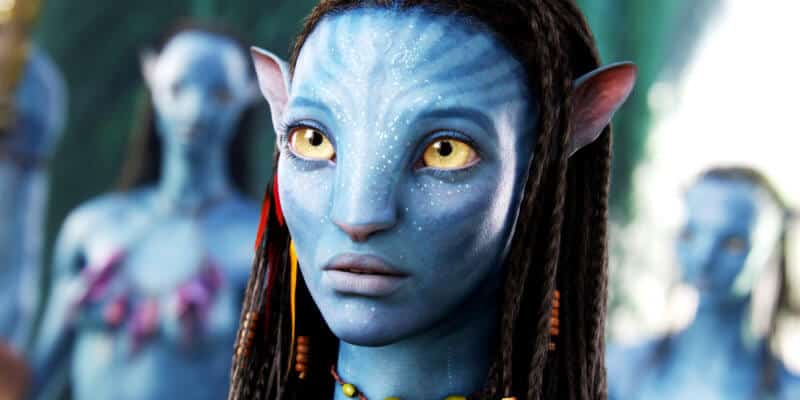 Film producer Jon Landau is well-known for producing the internationally famous films “Titanic,” “Avatar,” and “Dick Tracy.” “Titanic and “Avatar,” two of the highest-grossing films of all time, each brought in over $2 billion in gross box office revenues. Additionally, “Titanic” scored Landau his first Academy Award for Best Picture.

Before Landau’s significant successes as a film producer, he first made his mark in the film industry in the early ’90s when he served as Executive Vice President of Feature Film Production at Twentieth Century Fox, where he first met James Cameron.

Landau: When I was an executive at 20th Century Fox, I got to know Jim Cameron. I was a studio heavy with him on a movie called “True Lives.” We survived each other, but I decided to leave the studio, and Jim asked me if I wanted to come onto a movie called “Planet Ice.” That was the code name for “Titanic.” We did “Titanic” as partners, and we decided it worked and to keep doing it. 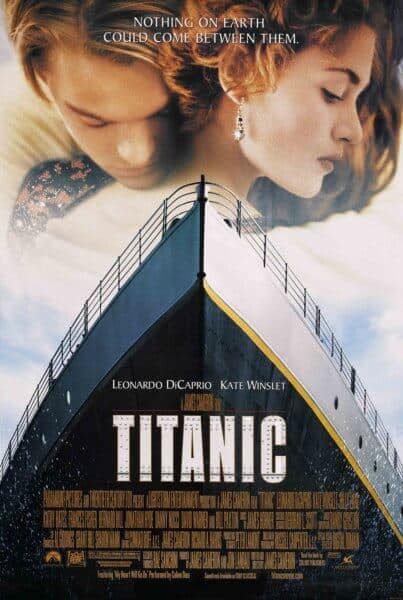 Together Cameron and Landau created, at the time, the highest-grossing film ever. “Titanic” was an international success that won both men the highest accolades in Hollywood. This success also inspired Cameron to continue looking for stories, which led him to “Avatar.” However, at the time, Landau knew the creation of the film was nearly impossible with the era’s cinematic technology.

Landau: In 1995, Cameron shared with me a scriptment that he had read for something called “Avatar.” I loved it. I fell in love with it, but the technology was not there to make the movie. And we waited another ten years to make the film. And I said to him in 2005, I think we’re at a point where technology is there and that we can be the impetus to push it to allow us to tell this story. Technology was not about 3-D. It was about creating immersive and engaging characters who could be the Navi and the Avatars. 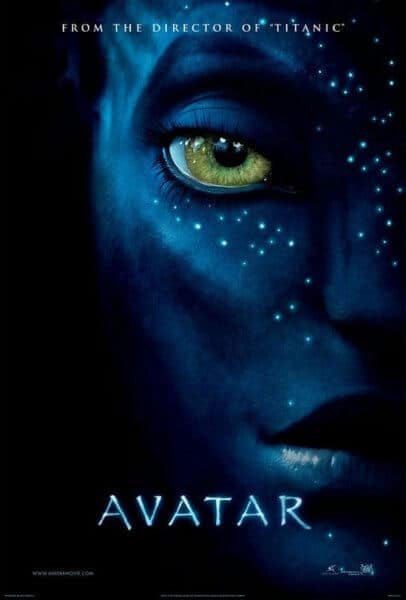 A film originally meant to start production back in 1997, pushed back to 2005 due to a lack of necessary technology, was finally underway. The film took four years, a 237 million dollar budget, and extensive use of new motion capture filming techniques, but it was finally released in 2009.

Upon its release, the film became a hit around the world. Both Landau and Cameron had no idea that the success of “Avatar” would bring in billions at the box office and inspire an entire themed land.

Landau: For both Jim and I, one of our biggest thrills after the release of “Avatar” was the breakfast that we had with Bob Iger, where Bob said, “we want to do something with Avatar in our theme parks.”

Why? Jim and I had been huge fans of Disney. So to be able to do that and then start working with the incredible team of Imagineers led by Joe Rohde, to envision this at a place called Animal Kingdom, that, to be honest, we had never heard of before we started developing it.

Then once we started coming down and visiting, we understood, especially from Joe, and his passion for what Animal Kingdom was. We saw why it was the right fit for Avatar. And it was something on the outside that many people couldn’t see at first. But when you understand the three great values, Animal Kingdom has, those are true to Avatar.

After the construction was complete on Pandora – The World Of Avatar at Disney’s Animal Kingdom, Landau had realized how influential the franchise had become. Before this physical land, Avatar was make-believe, only existing digitally on a computer.

Something that had taken years to make and existed only in a film had become a place for people to visit from around the world.

As overwhelming as it was for Landau personally to experience Pandora – The World of Avatar for the first time, he wasn’t the only one from the famous film franchise to overcome the new land at Walt Disney World. 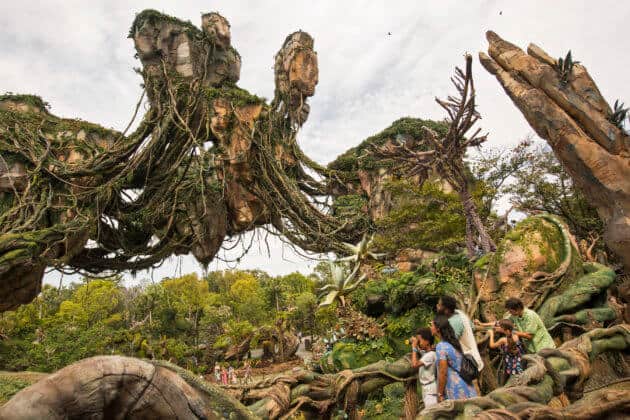 Related : Inside Look at ‘Avatar 2’ Development With Behind-The-Scenes Photos

WATCH – WALKING TOUR OF PANDORA – THE WORLD OF AVATAR:
https://youtu.be/J7zEvWTmgYM

Landau: When we were making the movie, we were working in a virtual world. Nothing was confirmed. Pandora at Disney’s Animal Kingdom is honest. I, Guests, friends of mine who come with me get to be at Pandora. It’s a tactile experience, and that is so thrilling.

We went on Flight of Passage, and I took Zoe Saldana and Sigourney Weaver for the first time to ride it. They came off in tears, and they were crying. They had spent months imagining this world in their heads, and for them to experience it… we had to stop and wait inside for like 10 minutes for them to recover.

Since Pandora – The World of Avatar’s opening at Disney’s Animal Kingdom, a few additions have come to the land that was not a part of its original opening. Specifically, a new Pandora Utility Suit, which made its debut earlier this year.

This new “Avatar”-themed suit, not featured in the “Avatar” film, has only appeared in the themed land at Walt Disney World. However, Landau revealed that the idea of the suit was inspired by the coming “Avatar” films sequels. 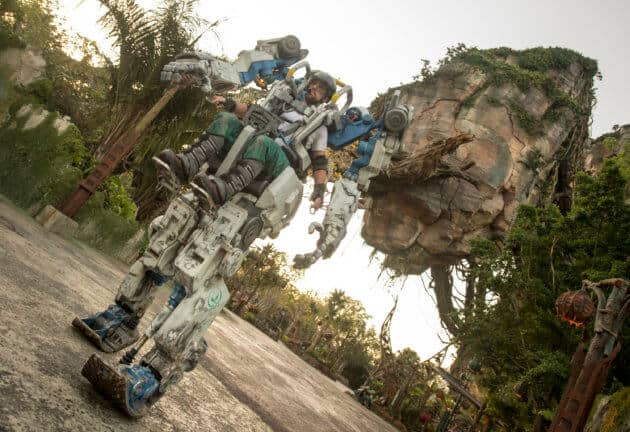 Landau: The new utility suits came out of a design idea we have for the sequels. We were trying to find a way to bring something in here where you take a piece of technology that is not militarized but is used for science. And that is something we wanted in our movie as well. So our artists came up with the initial designs for it, and our team has worked with Imagineers to create it.

As groundbreaking as the opening of Pandora – The World of Avatar has been for the franchise, it is still only in its infancy. In total, the series will contain five films, with its last premiering in 2025.

Landau wasn’t able to discuss too much of the upcoming sequels. Although, he was able to give us just a bit of info to keep us waiting on the edge of our seats for more.

Landau: As we’ve moved on with the sequels to “Avatar,” we made a very conscious decision to stage the whole four sequels on Pandora. We don’t need to go to another world if we want water; we’re going to go to the oceans of Pandora. Just like you see in Flight of Passage. Also, some of those creatures you see (on Flight of Passage), don’t be surprised if they show up in the films. 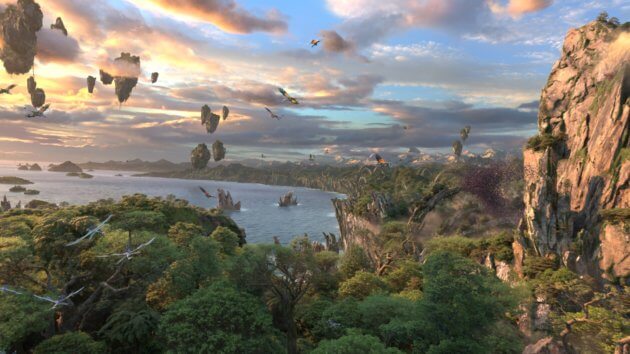 Favreau Spotted on ‘Avatar’ Set – But Why?

The official release date for the next Avatar film is scheduled for December 18, 2020. In the meantime, if you want to experience the bioluminescent world of Pandora in person, be sure to visit Pandora – The World Of Avatar at Disney’s Animal Kingdom.