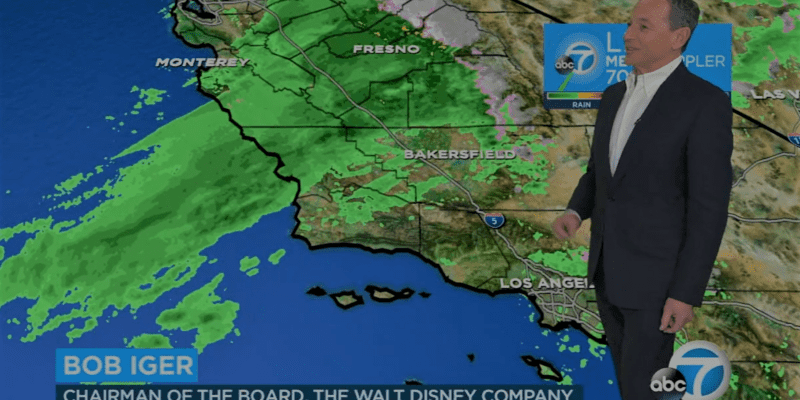 It’s a day all Disney fans knew was coming, but now that it’s here we’re not quite ready to say goodbye.

After more than 47 years working at ABC and The Walt Disney Company, including 15 years as Disney CEO, Bob Iger is stepping down as executive chairman of the board at the end of this month.

And today, Iger returned to his weatherman roots with a fun interview on ABC!

Bob Iger was a beloved and successful CEO at the Walt Disney Company, steering Disney through acquisitions of Lucasfilm, Pixar, Marvel Studios, and 21st Century Fox to become the giant entertainment company it is today.

The longest-serving Disney board member, after taking over as CEO after Michael Eisner in 2005. Bob Iger’s tenure saw Disney’s annual net income increase more than 400 percent, with Disney having seven movies in 2019 selling at least $1 billion in tickets worldwide.

Iger will be replaced as chairman of the board by longtime board member, Susan Arnold, and he recently wrote a letter to Cast Members and employees as his exit approaches.

During the interview on ABC, Bob Iger returned to his role as a weatherman, a job he first had at the age of 23 years old. Asked about his long career with ABC and Disney, Iger said:

“I’m often asked: Would I change anything? The answer’s no, it worked out just fine. I’ve had just a great experience over 47 years with ABC and Disney. I’ve loved what I’ve done, every day that I’ve come to work I’ve been happy. I’m privileged to have had the opportunity to run this great company.”

The interview also revealed that Iger is planning to write another book, after his New York Times bestselling memoir “The Ride of a Lifetime: Lessons Learned from 15 Years as CEO of The Walt Disney Company:

“I’m looking forward to what comes next, although I’m not 100% sure what that is. But I haven’t had a day off since 8th grade.

I am [thinking of writing another book]. I’m thinking about it. Right now, it feels like a gigantic homework assignment. But yes, I’ve been fascinated by how leaders led though the global pandemic, leading through a crisis.”

One of Iger’s first jobs in show business was as a weatherman before he joined ABC in 1974 – 22 years before Disney acquired the network.

And it seems the former Disney CEO has retained his weatherman skills, with KABC meteorologist Leslie Lopez asking if he would co-anchor a weather report during the interview. Iger replied: “I have not done the weather in 48 years.”

He stepped up though, and presented an informative and well-presented weather report to the Southern California area! He even quipped about this morning routine:

Bob Iger was replaced by Bob Chapek in February 2020. Since becoming the 7th CEO of the Walt Disney Company, Bob Chapek has definitely divided Disney fans over his direction and approach to the job.

Iger is currently acting as chairman to help guide Chapek through the transitional period. Iger will be ending his Disney employment at the end of the year, and Chapek will be on his own.

During a recent annual retreat for the company’s upper management at Disney’s Aulani Resort in Hawaii, Iger seemed to hint at the data-driven nature of Chapek. Iger spoke about his advice on successfully being the CEO of The Walt Disney Company and not to let data control their decision, but rather, creativity.

Chapek did not have it easy to begin with as CEO, starting just before the COVID-19 pandemic and making difficult decisions throughout this last year and a half, including budget cuts and layoffs.

A petition went viral recently trying to persuade the Walt Disney Company to fire Chapek, with the petition gaining over 80,000 signatures as of the time of writing.

The petition discusses Chapek’s focus on budget cuts and laying off over 28,000 employees through the company, as well as moving attention to Disney+, Disney’s streaming service, and away from the quality of the Disney Parks.

Let’s hope Bob Iger’s future outside of the Disney Company is sunny, with no chance of storms!

You can watch the segment on ABC below:

Are you sad to see Bob Iger leave the Walt Disney Company? What do you think about Bob Chapek?