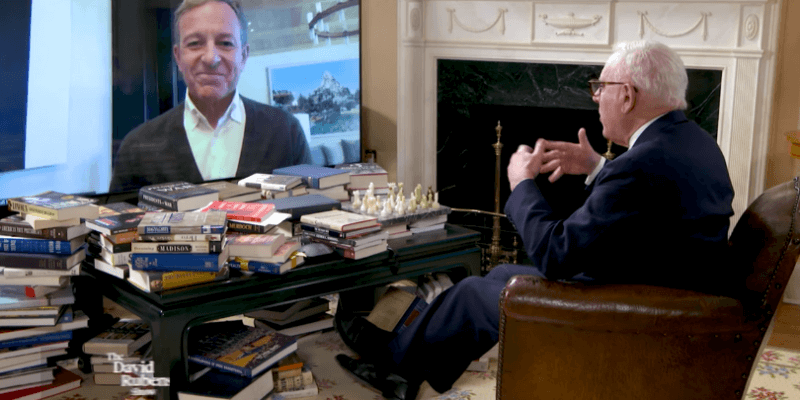 For nearly 15 years, Bob Iger served The Walt Disney Company as its Chief Executive Officer, but his tenure was not supposed to be as long as it was. In fact, he was poised to step down at least twice.

“I’m told that that’s a common ailment of CEOs that have had decent tenure,” Iger explained to David Rubenstein on The David Rubenstein Show: Peer-to-Peer Conversations, “I failed leaving a few times.”

“The first time,” he recalled, “we had had a succession process that didn’t work out as we had hoped and so I agreed to stay on for a little bit longer and then the last time was solely due to the largest acquisition that we had ever made and that was most of the assets of Twenty-First Century Fox.”

“I knew when I proposed doing that to the board–which was close to when I was supposed to step down,” he continued, “that they would say ‘well, we will support you in this effort as long as you agree to stay.’ They did not want–and for good reason–to go through a CEO transition just at the time we were making the biggest acquisition we ever made.”

You can watch the full interview clip (which was recorded on September 11, 2020) here:

The adage, “don’t start anything you can’t finish” comes to the mind of this reporter as Iger is forced to continue running the company as Fox was moved beneath the proverbial Disney umbrella. But, his first reason for extending his tenure potentially raises some eyebrows.

Did Disney almost have a different CEO?

In the end, one Disney Bob would replace the other, with Bob Chapek stepping into the role of CEO in February of this year. But, could someone else have taken the role? Iger recalls that there was a process already underway to choose a successor, but that it fell through.

While there was no confirmed successor name when Iger first planned to step down, he appears to have had another choice first. Iger would go on to disclose in February that he identified Chapek as the ideal candidate early in the process. But at the time, outsiders pegged Chief Operating Officer Thomas Staggs as the “heir apparent.”

Staggs left the company in 2016 seemingly derailing a succession process already in the works and causing Iger to stay on while the process was reset. This time, with Bob Chapek, the now-former chairman of Disney Parks, Experiences and Products.

Josh D’Amaro took over the Parks, Experiences and Products division when Chapek stepped into the CEO role earlier this year.

We may never know for sure what–or who–caused Bob Iger to stay on as CEO that first time, but he was finally able to step down this year.

Iger will continue on as Executive Chairman of the Walt Disney Company for another year before finally stepping down from that role at the end of 2021.

What do you think about Bob Iger’s extended tenure? Do you think he picked the right successor? Let us know in the comments!