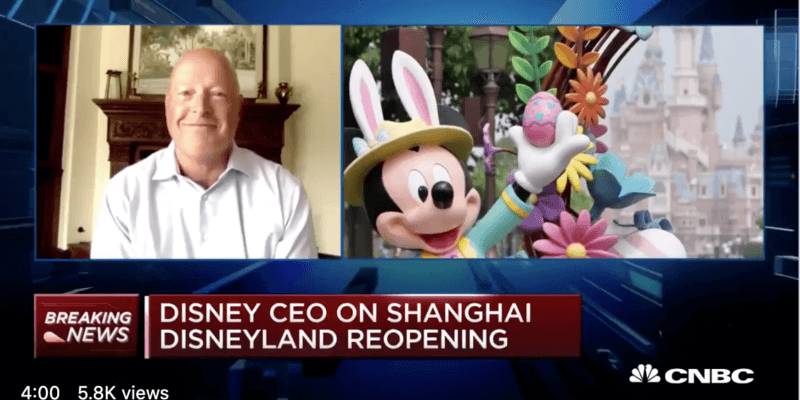 In an exclusive interview with CNBC, Disney CEO Bob Chapek shared some additional details on the company’s goal to reopen the US Disney Parks by taking Shanghai’s lead.

The Shanghai Disneyland resort just completed their first day at reopening to guests with all the new health and safety protocols in place. The current safeguards include:

During the interview, Chapek shared some of Shanghai Disney’s successful efforts, like for example, how they were able to control guest capacity by using a reservation system. The tickets sold out within hours, showing how the Disney fanbase is eager and willing to return to the magic.

CNBC’s Julia Boorstin, who conducted the interview, asked Chapek about the bookings and what they are expecting in terms of attendance looking into next quarter. Chapek shared how in Shanghai, they are considered a short-book market where their ticket sales are typically sold on a more week-by-week basis. He confirmed they are sold out with a limited amount of availability available.

Disney Fans Ready to Return to the Magic

Bob added that he’s heard the fanbase share how returning to the parks represents going back to that semblance of normal, or a new normal. “We certainly want to open as soon as we can, across the world, but we’re gonna do so in a responsible way” Chapek added.

Boorstin asked about the profitability of running the parks at that 30% or less capacity and the sustainability of that plan. Chapek responded by confirming they are keeping to the government cap of 30% guest capacity, with an increase of 5,000 guests a week while keeping with all the safety guidelines in place. The increase will continue weekly and “as [the] government loosens the restraints and restrictions”. The increase in guest attendance will also depend on Disney’s own guidelines in a responsible way. “Slow and steady for us”.

When asked about reaching that 100% capacity, Chapek said that will have to do with how guests observe the guidelines set in place.

The Future of Disney Parks

When asked about Tokyo, Hong Kong, and the US Disney Parks, Chapek did not comment on any specific dates. He did add that they are working within the guidance provided by the state, federal, and local governments as well as healthcare experts working with local hospitals. However, he noted that Walt Disney World’s Disney Springs reopening May 20th is a great sign! Disney observed how Disney Town in Shanghai was open for about a month and everything went smoothly there with guest cooperation and operations keeping to the standards they set in place. Chapek is hoping to see the same play out in Disney Springs come May 20th.

The Challenges Disney Parks are Facing with Reopening

The biggest challenge and key point to getting the domestic parks to being operational again seem to be social distancing and using face masks for both the Cast and guests, Chapek shared. He noted that in Asia, this practice is much more commonplace, even prior to the pandemic. However, that is not the case here in the US. He noted that this practice will be trying, especially in hot humid environments, such as at the Walt Disney World Resort in Central Florida during the summer.

“We’re very encouraged by what we see in Shanghai.” Disney CEO Bob Chapek says the company will be “very conservative” as it reopens its theme parks. https://t.co/OPGAPam4Gh pic.twitter.com/sFydyCzQhX

What are your thoughts on the new protocols that Disney will hope to implement in order to keep guests and cast safe? Will you continue to plan visits while these safety measures are in place? Let us know your thoughts in the comments!