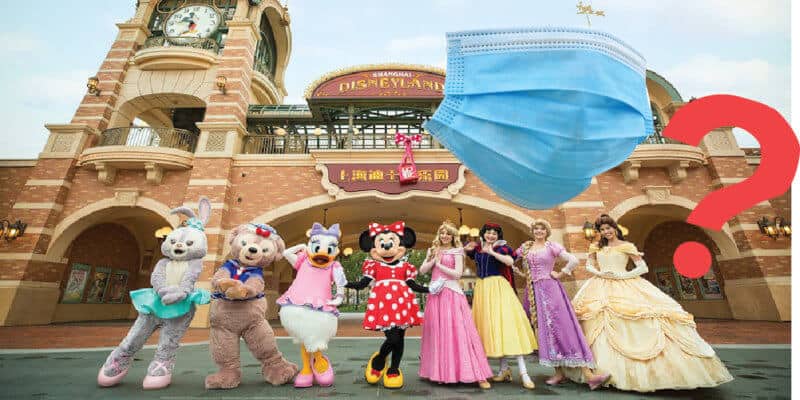 Shanghai Disneyland resort has officially opened back up to the public, with limited capacity to reduce visitor numbers, and social distancing measures to ensure guest and Cast safety during the coronavirus pandemic. In an interesting development, it appears that guests reportedly will NOT be required to wear protective masks during the entire duration of their visits to the park.

Check out this tweet from user @gourmetdyy who shared what looks to be an official announcement that shares this information:

This would be a new development, as the official Shanghai Disneyland website has a different guideline in place for masks. According to the official press release about the procedures of the park that guests must comply with, it states:

“Wear an approved mask during the entire visit to the resort except when dining.”

This is included within the social distancing guidelines and safety measures in the press release, which includes policies like temperature screening for visitors in as an early detection system to prevent another outbreak.

Face Masks Can Be Removed For Photos at Shanghai Disneyland

Despite this, guests that have visited Shanghai Disneyland have been posting pictures on social media without masks on throughout the park. It appears that for the most part, guests are taking off masks for quick photo ops.

In many photos and videos of the park reopening, multiple guests and Cast Members can be seen without masks on at times. This can be observed in this livestream posted of the official reopening of the park:

These photos and videos corroborate the announcement reportedly made that user @gourmetdyy had tweeted about. The official press release does not state that the removal of masks is allowed for things like photo ops or riding attractions, so this could be a new development that Shanghai Disneyland will update in the near future as it is still in its initial reopening phase. However, as this is a developing story, there is no word if this means they are taking a less strict approach or will amend this policy by stating that guests cannot take off masks for things like getting photos.

How do you feel about this potential new change in policy? Let us know in the comments!