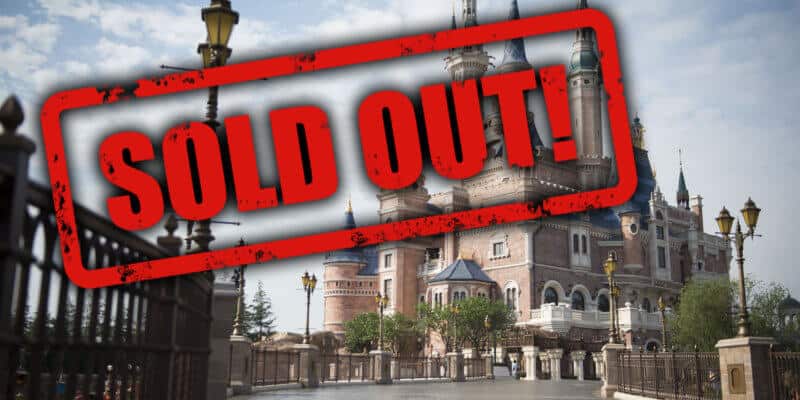 As we previously announced, the reopening of Shanghai Disneyland is coming Monday, May 11, after the park had been closed for over 100 days — and park guests are very excited. In fact, they’re so excited that Shanghai Disneyland completely sold out of tickets for its reopening date in a matter of minutes.

The sellout of tickets was confirmed on the Shanghai Disney Resort website within minutes after bookings became available at 8 a.m. Friday local time, according to Time.

In the theme park’s reopening, similar to other Disney Parks announced plans prior to reopening post pandemic, it will implement a list of safety measures, including only allowing one-third of the park’s typical capacity through its gates.

Shanghai Disneyland’s normal capacity is over 80,000, however, following social distancing measures, the Chinese Government has requested Disney keep attendance down to 24,000 guests a day. Though, Disney executives have stated they are going to open up far below that with gradually open up to 24,000 a day.

Additionally, employees will undergo health and safety training, be encouraged to take part in contactless interactions with visitors and will be provided masks and additional equipment.

The park will also be temporarily suspending parades and nighttime spectaculars and close interactions and close-up photos with costumed characters. Although, the park will offer daily Mickey and Friends Express character procession.

The opening of Shanghai Disneyland is the first reopening of any Disney property across the world during the pandemic and will soon be joined by Disney Springs in Walt Disney World beginning May 20. Similar to Shanghai Disneyland, the entertainment shopping center will also have to follow strict guidelines to enforce social distancing and aid in helping stop the spread of the virus.

What are your thoughts on Shanghai Disneyland selling out of park tickets within a matter of minutes? Let us know in the comments!