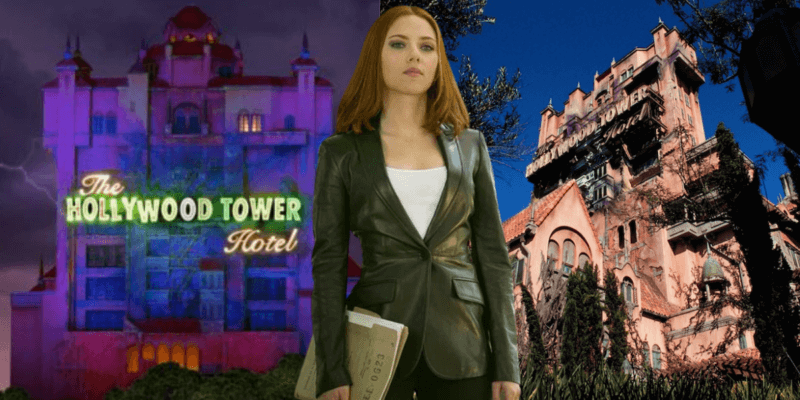 If you’re like us, and can’t wait to hear this line as soon as you enter Disney’s Hollywood Studios…

…then you’re in for a spine-tingling treat. Disney’s upcoming Tower of Terror movie is moving forward and has found its director!

Scarlett Johansson was announced to be both starring and producing in a new movie adaption of the beloved elevator ride, but fans were worried the recent feud between Disney and Johansson would leave this project unfinished.

The feud began when Scarlett Johansson sued Disney for releasing Marvel’s Black Widow (2021) on Premier Access on Disney+. instead of exclusively theatrically. With some of Johansson’s pay coming from the film’s box office sales, her legal team has argued that the simultaneous release of the film on two platforms may have swayed potential theater-goers to stay home since the option was available to them.

According to Johansson and Disney, the sides have amicably settled their lawsuit and will continue working together on future projects, including Johansson’s highly-anticipated Tower of Terror movie.

Now, with the project up and running again, it seems Taika Waititi has signed on to direct the Tower of Terror movie!

According to The DisInsider, Waititi is at the helm of the project and working alongside Johansson again after the release of their Searchlight Pictures movie JoJo Rabbit (2019):

Academy Award-winner Josh Cooley (Toy Story 4, Inside Out) has penned the script. Although details are currently under wraps, the film will be based on the famous and widely popular Walt Disney World attraction of the same name. As of now, it is unknown if Johanson or Waititi will star in the project.

Of course, Disney fans know Taika Waititi from his amazing and unique take on projects such as Lucasfilm’s The Mandalorian, Disney’s Moana (2016), Marvel Studio’s Thor: Ragnarok (also starring as the voice of fan-favorite Korg), and the upcoming Thor: Love & Thunder (2022).

Disney has found success with adapting its own Park attractions into movies, with Disney’s live-action Jungle Cruise (2021) starring Dwayne Johnson releasing this year to incredible hype, as well as the popularity of the film franchise of Pirates of the Caribbean with Johnny Depp.

Tower of Terror was, in fact, the first theme park ride to be adapted into a movie, with the made-for-television movie released back in 1997 starring Steve Guttenberg and Kirsten Dunst.

The attraction itself has many versions across Disney theme parks, but all feature the terrifying elevator drop.

At Disney’s Hollywood Studios in Florida, the Hollywood Tower Hotel is located in Sunset Boulevard and takes Guests through a spooky preshow in the library to the service elevators. Tower of Terror sets Guest on their own narrative to the Twilight Zone, which will surely translate very well on-screen.

Guests at Tokyo DisneySea and Walt Disney Studios Park in Disneyland Paris also enjoy different versions of the attraction, while in Disney’s California Adventure, the attraction saw a recent refurbishment into Guardians of the Galaxy – Mission: Breakout! that saw stars like Chris Pratt and Bradley Cooper reprising their famous MCU roles.

We can’t wait to see what happens with this Tower of Terror-based movie, so stay tuned to Inside the Magic to learn more!

What do you think about Taika Waititi directing the Tower of Terror movie?