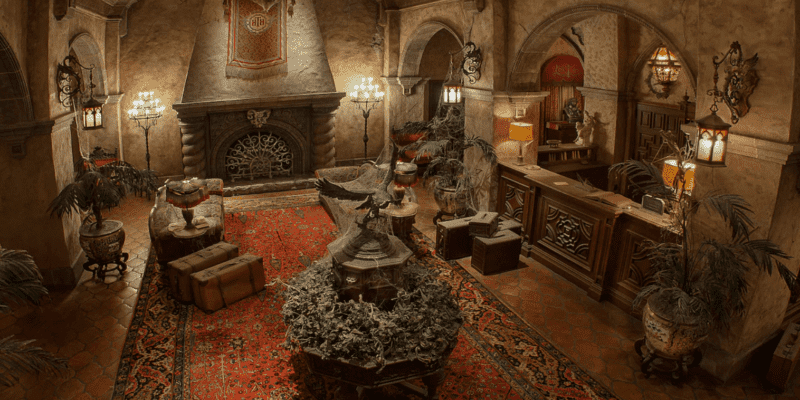 As Disney has officially begun The World’s Most Magical Celebration with the 50th anniversary taking over and bringing magic to Guests. With the celebration has come a very magical change at all four parks, the Beacons of Magic.

At Magic Kingdom, Cinderella Castle lights up into a shimmering goddess of a structure, which is even more stunning in person than in photos. EPCOT’s Spaceship Earth saw a permanent transformation, as Spaceship Earth now lights up from within. The shine and patterns that are currently produced are genuinely jaw-dropping and significantly enhance the Park’s look. Disney’s Animal Kingdom also transforms the Tree of Life into a 50th masterpiece, and at Disney’s Hollywood Studios, we actually travel back in time!

In the concept art photos, we saw that a shimmer would be added to Tower of Terror, making the abandoned hotel look beautiful once again, but until its debut, we had no idea what that meant or what it would actually look like. Now, we can see that the hotel had clearly returned to a better time when it was fully operational and accepting Guests, which is something we have never seen at the attraction.

We know the ride to have been left abandoned from the storyline that allows Guests to enter their own episode of The Twilight Zone. On October 31, 1939, five Guests entered the service elevator where they were struck by lightning and killed, sent to another dimension. Since then, the lobby, architecture, and landscape have been left untouched and left to rot.

Now, when the Beacons of Magic light up the attraction, it comes back to life! We no longer see the decayed orange color tone, but a much more lively and vibrant scheme. On the top floor, we can also see The Tip Top Club is back in action as Guest’s shadows can be seen dancing and moving around through the top floor window!

Drew (@DrewDisneyDude) posted a video of the party on Twitter so that you can see the lively dancing for yourself.

The Tip Top Club! This is definitely the best detail on The Tower of Terror Beacon of Magic.

The Tip Top Club! This is definitely the best detail on The Tower of Terror Beacon of Magic. ⚡ pic.twitter.com/sBl4IDWaiY

Disney is full of little magical touches this 50th anniversary, such as the monorails lighting up in the evening, busses sending out special messages and so many more. Each Disney fan will likely notice a new detail added to the parks when they visit over the next 18-months, which is a great reason to continue to return!

What do you think of the Tower of Terror Beacon of Light at Disney’s Hollywood Studios?

We can help you book the Disney trip of a lifetime! Walt Disney World’s 50th lasts a full 18 months, giving you until early 2023 to experience the magic. Click here to make your vacation dreams become a reality!