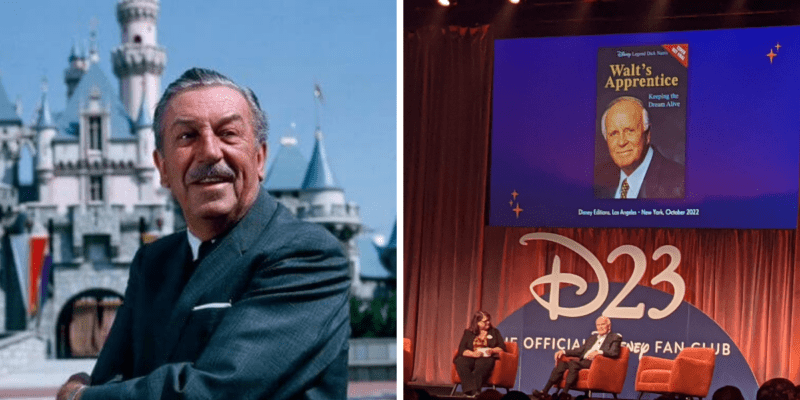 It’s hard for most of us to imagine a world without the iconic stories of Walt Disney.

His influence on animation, film, theme parks, and family entertainment has been around since 1920, giving us the magic we all know and love for over 100 years.

At a recent D23 event announcing his upcoming book, Disney Legend Dick Nunis recalled some never-before-heard stories about Walt Disney, as well as telling some humorous tales of his own career.

At Destination D23, held at Disney’s Contemporary Resort in Walt Disney World in Florida, the event hosted a section called “A Conversation with Dick Nunis”, with Walt Disney Archives Director Becky Cline discussing with Nunis his role in leading the Disney Parks from the 1960s to his retirement in 1999.

During the presentation, Nunis revealed some funny tidbits and heartfelt moments from his career journey at Disney.

Nunis was inducted as a Disney Legend in 1999 for his work within the Walt Disney Company beginning with his summer job at Disneyland in 1955. He moved up through attractions management positions before becoming Executive Vice President of Walt Disney World and Disneyland.

One of the highlights of the talk with Dick Nunis was his story about asking Walt Disney not to smoke in the Park.

Nunis explained that Cast Members were smoking between their work area and break room, and would give Dick the excuse “Walt smokes in the Park” when they were asked not to smoke. He discussed the situation with Walt, who took Nunis’ comments on board.

Nunis also recounted the day that Walt Disney died – December 15 1966 – and the decision whether or not to open Disneyland:

During the fascinating D23 presentation, Dick Nunis also revealed he is publishing a book in October 2022 about his time working at Disney and alongside Walt himself.
The book will be called “Walt’s Apprentice: Keeping the Dream Alive,” and will focus on Nunis’ work within the Walt Disney Company, with a focus on how he continued Walt’s dreams of his Florida Project along in the years following his death.
During the talk, Nunis commented on work ethic and how he achieved what he did with the Walt Disney Company:

“Young people today really don’t learn in school how to be successful in life, because they forget one thing. They all try to criticize other people to get promoted. And all you have to do is do the best job you can with the job you were given to do.”

There were also some highly entertaining moments during the talk with the Disney Legend, with Nunis berating the Walt Disney Archives team:

The infamous line from Dick Nunis at #DestinationD23. This will go down as one of the best moments of any @DisneyD23 event!

The infamous line from Dick Nunis at #DestinationD23. This will go down as one of the best moments of any @DisneyD23 event! pic.twitter.com/TStzZEhu1Q

Nothing speaks louder than the Disney of today than the current WDW’s Ambassador messing up Dick Nunis’ name. #DestinationD23

Nothing speaks louder than the Disney of today than the current WDW's Ambassador messing up Dick Nunis' name. #DestinationD23

Dick Nunis saw a lot of changes during his career with Disney. When he joined Disneyland in 1955, the Park employed 600 Cast Members. By the time he retired in 1999, Disneyland had 13,000 Cast Members and Walt Disney World employed another 50,000.

“During those early years, Dick learned Walt Disney’s theme park philosophy firsthand. And, as he guided the growth of Disney’s outdoor attractions from a single park into a worldwide resort, the premier theme park executive always kept his focus on the people.

Born May 30, 1932, in Cedartown, Georgia, Dick received a football scholarship to the University of Southern California (USC). His ambition to become a professional football player and coach was cut short, however, when he suffered a broken neck while playing ball. In 1955, he graduated from USC with a Bachelor of Science in education.

Dick learned about Disneyland through his classmate, Ron Miller, who was Walt’s son-in-law. On a lark, he decided to apply for a summer job at the new theme park and was hired by Van France, founder of The Disney University and author of the Park’s orientation and training program.

In 1980, a month after his 25th anniversary with Disney, he was named president of the Outdoor Recreation Division, overseeing Walt Disney World, Epcot Center and, later, the Disney-MGM Studios Theme Park. Dick also consulted on plans for Disneyland Paris and Tokyo Disneyland while serving on the Walt Disney Productions Board of Directors.

On May 26, 1999, exactly 44 years to the day since he joined the Company, Dick retired as chairman of Walt Disney Attractions.”

What fun Walt Disney stories do you enjoy? Let us know in the comments!