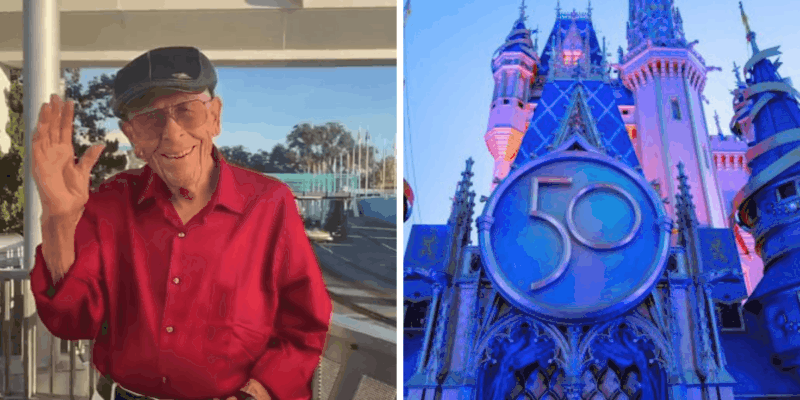 He’s a Disney Legend, a famous Imagineer, and he’s turning 90 this year.

But that isn’t stopping Disney Parks treasure Bob Gurr from enjoying the rides he designed.

This week. Disney Parks featured a fun and adorable video of Bob on their TikTok as part of Walt Disney World’s 50th anniversary celebration.

If you’re a fan of Disney Parks Imagineering, you know Gurr as the designer of numerous ride vehicles for Walt Disney’s original Disneyland Park, including Autopia, Matterhorn Bobsleds, the Disneyland Monorail, and the Haunted Mansion (specifically the Doom Buggies).

Back in 1954, the year before Disneyland opened, Walt Disney hired Bob Gurr and 17 other Imagineers to make his “dream a reality”. Gurr is the last living member of that original creative group.

And as part of Disney’s celebration of long-standing cast members, they showcased a montage of Bob revisiting his own attractions:

How wonderful is this video? Bob looks so happy to be riding the Monorail, experiencing the Tomorrowland Speedway (which opened at Magic Kingdom following the original Autopia attraction in Disneyland), and seeing the Haunted Mansion once more.

Gurr blowing a kiss to the Monorail that “inaugurated transport in Walt Disney World 50 years ago” definitely captures our hearts. In the video, Bob says:

“Today I’m back here, and I have such memories of those early days, and then mixed new with the memories today at 50 years in time. It’s almost like I never left.”

Gurr is turning 90 on October 25 this year, and the public is invited to help him celebrate at his birthday luau. You can get more information for this event by visiting FandomProductions.com.

If you want to see more of Bob, The Imagineering Story on the Disney+ streaming platform features some lovely stories as well as Gurr showing off some behind-the-scenes footage of the famous Matterhorn.

Would you love to meet Bob Gurr? Let us know if have in the comments!