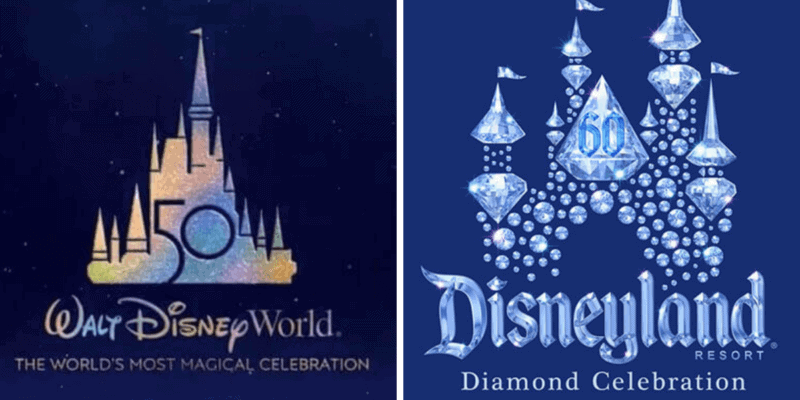 Both Images Credit to Disney

Big milestones for the theme parks are always celebrated in a grand fashion. This October will kick off Walt Disney World’s 50th anniversary celebration, and Disney has announced so many extra special offerings for Guests during that time.

Disneyland decorated both of their park icons, Sleeping Beauty Castle at Disneyland Park and Carthay Circle at Disney California Adventure Park, in gorgeous diamond decorations. Disney World will also be decorating each of their park icons in beautiful new nighttime projections, and Cinderella Castle at Magic Kingdom will receive extra decorations. So that is something you can expect to be similar from Walt Disney World during “The World’s Most Magical Celebration” that you may have seen at Disneyland’s Diamond Celebration during 2015 and 2016.

Disney World has announced that they will be doing the same! The characters we know and love will be covered head to toe in EARidescence. EARidescence encompasses the rich royal tones of blue, purple, and gold. This color scheme can be found throughout the entire resort, and we are certain that much like Disneyland for their 60th, Disney World will also release merchandise to match this color scheme.

Here is a look at Mickey and Minnie’s 50th anniversary outfits for Walt Disney World:

Something that we are not sure of at Disney World is the offering of special 50th anniversary-themed nighttime entertainment. Currently, Magic Kingdom is not setting off their iconic fireworks, as nighttime entertainment was suspended amid the current pandemic. EPCOT is set to debut a new show, HarmonioUS in 2021, although no specific premiere date has been set yet.

For Disneyland’s 60th Diamond Celebration, Guests were treated to multiple new special nighttime entertainment offerings. The Paint the Night parade made its debut, special fireworks called Disneyland Forever came alive over Sleeping Beauty Castle, and even World of Color at California Adventure got an update to feature Mickey Mouse more prominently for the anniversary celebration. Though it isn’t yet announced whether there will be new fireworks or a parade at Magic Kingdom for the 50th anniversary, we’ll update our website when we know more information.

While you can expect many exciting new exciting offerings at the Walt Disney World Resort, we definitely think it is worth experiencing this anniversary in person if possible. Even if you visited Disneyland for the 60th Anniversary, the 50th anniversary at Disney World will be different and magical — and with the four parks at Walt Disney World, there is even more to celebrate!

If you have visited Disneyland for the 60th Anniversary, will you be visiting Walt Disney World for the 50th? Let us know in the comments!

We can help you plan the perfect Walt Disney World Resort vacation so you can visit during the 50th Anniversary Celebration! Click here for more information.