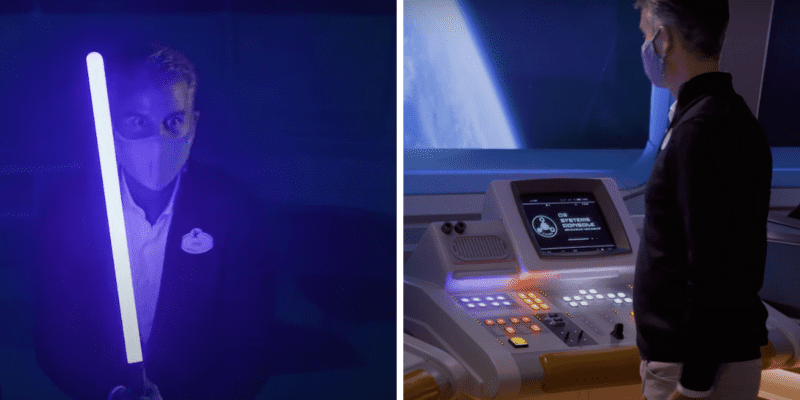 ‘Hans’-down, Star Wars: Galactic Starcruiser is where every Star Wars fan wants to be when it launches in March 2022.

Now, we have a sneak peek look onboard the Halcyon, including a look at the lightsaber training!

At Destination D23, Chairman of Disney Parks, Experiences and Products Josh D’Amaro revealed his own experience onboard the Halcyon with a sneak peek video.

Making many Star Wars fans jealous, Josh D’Amaro showcased his Jedi skills with the brand new lightsaber training on the Starcruiser, getting a preview of what Guests can expect on their journey to a galaxy far, far away.

“The hotel will be an incredible milestone for fans […] and will be the most immersive Star Wars experience. Guests will be their own heroes of their own stories and live Star Wars. […] Disney has always pushed the boundaries of innovation.”

D’Amaro also got to go to the bridge of the Starcruiser ship, and said: “in real life it is incredible”.

On the bridge, Guests get to push all the buttons, control the ship and even pull the lever to Hyperspace.

You can watch Josh’s experience on the Galactic Starcruiser below:

It was recently revealed that the “real” lightsaber first unveiled by Disney in April 2021 will not be sold to Guests, and is only for use by Cast Members.

Josh D’Amaro presented this “real” lightsaber to fans at the D23 event but mentioned that the weapon belonged to Rey.

Josh D’Amaro also revealed that Make-A-Wish families will be some of the first to experience Star Wars: Galactic Starcruise when it launches in 2022.

Have you booked a stay at Galactic Starcruiser? Let us know!