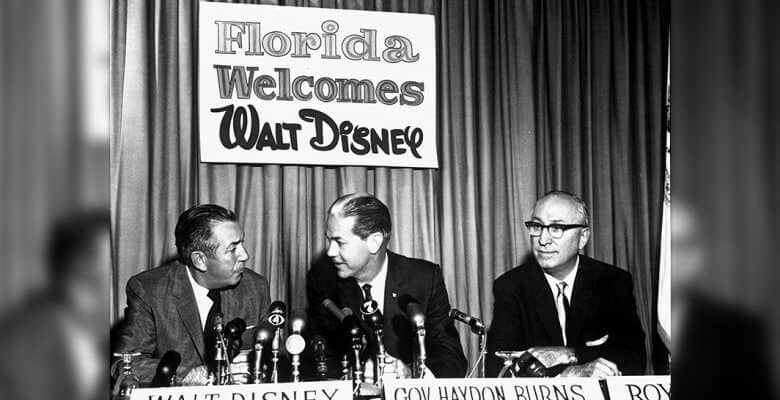 Many die-hard Disney fans know the story of The Florida Project. Walt Disney, after creating his first masterpiece (WDW-ers may call it a rough draft) in Anaheim, California, Walt set his sights on the East Coast. Snatching up large swaths of land via shell companies, he wasn’t even sure what his end project would be.

Amid murky rumors, on November 15, 1965, Walt hosted a press junket to announce that The Florida Project would indeed become not “Disneyland in Florida, [but] whatever Disney does in Florida.”

Over 50 years ago, Walt Disney and his company became front-page Florida news. The Orlando Sentinel’s top headlines on October 24, 1965, read, “We Say: ‘Mystery’ Industry Is Disney.” The paper claimed to have drawn together evidence that the long-rumored construction brewing in Orlando was actually a Disney project.

In 1964, Floridians had caught wind of several companies buying up cheap swampland in Orlando and Osceola counties. Rumors swirled trying to pinpoint the new owners; guesses included Ford Motor Co., McDonnell Aircraft, Lockheed, Boeing, and others. The Orlando Sentinel was on the scent, and by 1965, had reporters had pinpointed,

“a breakdown of 47 transactions worth more than $5 million. That Oct. 24 edition of the Sentinel included a look at how Anaheim, California, had changed in the decade since Disneyland had opened, a timeline of the mysterious land purchases, a map of where Disney would build, a cartoon depicting Disney’s ‘City of Tomorrow’ photos from Disneyland (including its monorail) and an editorial with the headline ‘Walt Disney to wave his magic wand over us.'”

Enchanted Tiki Room staple character “Jose” appeared aside Walt on the front page of the rag, which went on to detail in subsequent stories estimations of what the state could expect from alcohol sales to movie production. Dedicated police, fire, and housing service are mentioned, and just how incredible they would become could not be imagined. The Reedy Creek Improvement District is certainly an independent marvel, even today.

Later in 1965, Walt Disney and his brother Roy. O. Disney sat alongside then-Governor Haydon Burns at a press conference to officially announce “The Florida Project.” As mentioned before, the public was well aware of the landmass that Disney has purchased as well as the rough plans for it. At that time, though, even Walt himself wasn’t sure how it would flesh out. It would be, “the biggest thing we’ve ever tackled.” according to the movie mogul.

A few moments later, a press reporter asked if the area would be called “Disney World,” and that term stuck for the rest of time.  Governor Haydon declared, “I have made the appraisal that this is the most important day in the progress and the future development of this state. I know of no single thing in history that could have made the impact that the establishment of the Disney facility here will make.”

A new Wondery podcast, Business Movers with Lindsay Graham, explores Walt’s tenacity and vision as he pursued his bigger, better theme park in central Florida. The first series in the podcast covers four episodes as the “iconic business mogul built something from the ground up,” Graham says. Business Movers tells business lessons with not only a takeaway but also a human story. There’s nothing more appealing than a story of success and tenacity.

“Walt was clearly driven and believed in not only himself but his vision. The confidence to risk as much as he did at this point in his career on Walt Disney World was amazing and centering a project in your [undying] confidence is inspiring.” Graham hopes you will learn something from his deep dive (complete with dramatic reenactments) into the Florida Project/Project Future with the first topic series on the Business Movers podcast. It’s the perfect audio setup as Walt Disney World Resort’s Magic Kingdom approaches its 50th birthday later this year. Catch it on iTunes, Spotify, and more podcast platforms.

Construction began on all the buildings and fixtures of Magic Kingdom right away. Main Street, U.S.A., Walt decided, would be designed to appear as the main street of a small town in the early 1900s. Walt Disney World’s Main Street U.S.A. was inspired by the main street in Walt’s hometown of Marceline, Missouri. The castle centerpiece of the park was to be Cinderella’s Castle from the 1950 film.

In just the next year, December 1966, Walter Elias Disney passed away. The Disney Company was without its visionary leader, and the company started to think, “What would Walt do?”. The planning for The Florida Project, now known as Disney World, was heavily underway.

Walt’s brother and eternal business partner Roy O. Disney came out of retirement to work with Walt’s team of Imagineers in order to realize Walt’s last dream. Cinderella Castle began to take shape, as did the buildings for all 6 lands of Magic Kingdom: Main Street U.S.A., Adventureland, Frontierland, Liberty Square, Fantasyland, and Tomorrowland. The Castle itself was a great feat of engineering, being completed a mere three months before the October 1, 1971 grand opening.

Before the opening speech, Roy decided that he wanted to alter the Park’s name to honor his brother, calling it, “Walt Disney World.” Unlike the opening of Disneyland Park in 1955, Mickey Mouse stood alongside the Disney brother, evoking the spirit of his creator.

Disney’s Contemporary Resort, Disney’s Polynesian Village Resort, and Disney’s Fort Wilderness Campground were staples of the early years of Magic Kingdom Tourism. River Country, the (at the time) world’s largest water park, followed in 1976, and EPCOT Center emerged as the true world of tomorrow on October 1, 1982.

Walt Disney World Resort continues to be a place of magic where imagination never ceases and the “park is never finished.” Walt Disney once said that there was enough land here to “hold all the dreams we could possibly ever imagine,” and we can’t wait to watch the strong, positive growth of the Parks over the next 50 years!