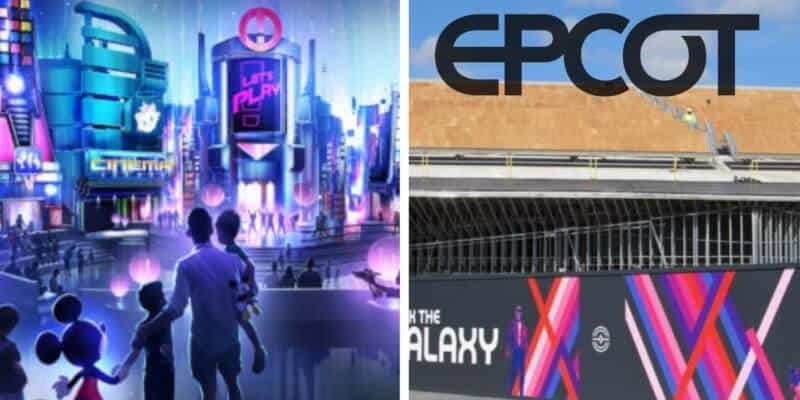 It was only a few years ago when Guests would enter Disney’s Hollywood Studios to find themselves surrounded by construction walls, which were eventually removed to reveal Toy Story Land and Star Wars: Galaxy’s Edge, leaving the park flooded with Guests. Now, it’s EPCOT’s turn.

At the D23 Expo in 2019, Disney announced some major changes coming to EPCOT, many of which were set to be ready for Disney’s 50th Anniversary Celebration in 2021. Of course, this announcement came before the knowledge that the world would undergo a pandemic that would put the Disney World theme parks through financial hardship as well as halt many of their construction projects.

The expansion to the U.K. pavilion — which was set to include a Mary Poppins Cherry Tree Lane attraction — as well as the  Spaceship Earth refurbishment have been put on hold.

Other projects range from looking nearly complete to resembling demolition zones. So, let’s take a look at every area of EPCOT that is currently being reimagined and assess what is going on construction-wise.

Future World is undergoing a huge renovation right now that will divide the section of the park into three new neighborhoods: World Celebration, World Discovery, and World Celebration (with World Showcase of course behind it)

In World Celebration, the core of EPCOT, Spaceship Earth Guests are meant to exit via Dreamers Point, where they are expected to have an exceptional views of a brand new Walt Disney statue . Things in these three neighborhoods are also set to be highly interactive, with Wonders of Life being converted to the immersive Play! pavilion.

At the moment, construction is underway for the Play! pavilion and the rest of World Celebration, but with the area flooded by construction walls, it is hard to gauge how far into the process Disney currently is. We can see that the former Mouse Gear location is currently mid-construction as well.

It has not been announced what areas will be ready for the 50th Anniversary Celebration, but it is expected that more areas will be open by that time. However, the vast amount of unfinished and exposed construction shows that Disney is working with a tight deadline.

World Nature is set to get the new Moana themed Journey of Water attraction next to The Land pavilion and The Seas with Nemo & Friends. This walk-through attraction was originally set to open in 2021, however that date now seems unlikely. It is, however, important to note that nothing has been confirmed by Disney.

World Discovery will make way for Disney’s newest roller coaster, Guardians of the Galaxy: Cosmic Rewind. The coaster’s attraction vehicles have already been showcased and the attraction is slated to open in 2021.

Disney describes the story of the attraction as:

At Guardians of the Galaxy: Cosmic Rewind the adventure will start in the “Galaxarium,” a planetarium-like exhibition that explores the similarities and mysteries of the formation of Earth’s galaxy and Xandar. You’ll be invited to learn more about Xandar’s treasures – until the moment when the Guardians of the Galaxy arrive, and adventures across the cosmos ensue.

That being said, there is still more work to be done to the exterior of this attraction. We can see that the construction team is hard at work putting up the roof to the attraction, but in the below photo it is clear that even the walls are still under heavy construction.

From what it looks like, Cosmic Rewind still has a long way to go in terms of the exterior construction if it is going to open in 2021.

Space 220 was meant to open in 2020 but due to the pandemic, that opening date has been pushed back. As we can see below, the restaurant sign is still covered as the eatery is still under construction. There has been no opening date set as of yet, but Inside the Magic will continue to keep you updated!

In the meantime, you can better acquaint yourself with the restaurant’s description as we anticipate its opening:

If we pop on over to the France pavilion, lots of changes are underway! Remy’s Ratatouille Adventure, an attraction that has a similar version at Disneyland Paris, will find a home in EPCOT! The attraction was originally set to open in 2020, but due to the pandemic, the date was pushed back. We do not yet have an exact opening day, but at the moment, the attraction is confirmed to open in 2021.

We recently reported that finishing touches were going up in the France pavilion. As you can see from this Disney Skyliner view, the new addition looks ready for Guests, and the marquee for Remy’s Ratatouille Adventure is in place.

Now, the team behind the attraction is just adding external detail work to the new addition of the France pavilion, which will cater to the immersive feeling of the section and connect it to the new attraction.

Stay tuned to Inside the Magic as we continue to track the major construction overhaul of EPCOT!

If you want to check out exactly what to expect at the Disney parks in 2021, click here for all the details! In terms of just EPCOT however, as we mentioned Guests can expect 2 new attractions: Guardians of the Galaxy: Cosmic Rewind as well as Remy’s Ratatouille Adventure! HarmonioUS, EPCOT’s new nighttime spectacular is also set to debut this year with the barges already being placed in the World Showcase lagoon. The rest of the projects are yet to be confirmed for 2021, however, we do hope to see them as soon as possible!

If you want to check out EPCOT’s construction in person, or perhaps come visit for Disney’s 50th Anniversary Celebration, click here to begin planning that magical vacation!

How do you feel about EPCOT’s construction process? Let us know below.

Comments Off on Will EPCOT Be Ready For the 50th Anniversary? Full Construction Update