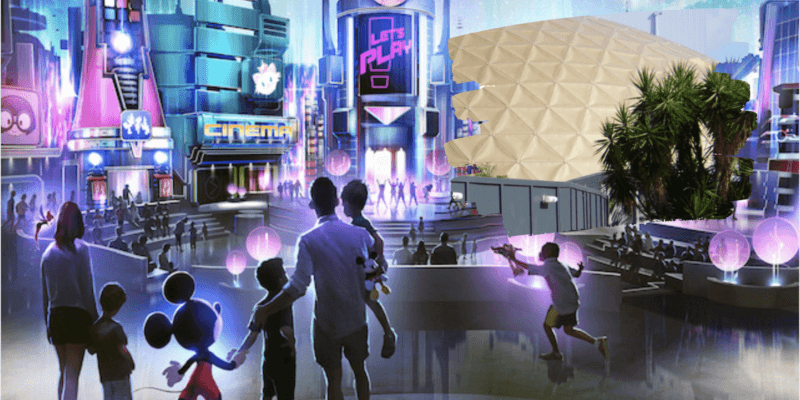 EPCOT’s reimagining is progressing, with continued work on the new World Discovery neighborhood’s Play! Pavilion. The exterior of the new building — which will be one of the main attractions in World Discovery — appears to be nearing completion.

Twitter user @bioreconstruct shared this photo of the roof, which resembles the surface of the iconic Spaceship Earth geosphere.

While we don’t know exactly what the inside of the Play! Pavilion will look like and no interior pictures have been released at this time, this Disney artist rendering indicates that the innovative new interactive space will resemble The Internet metropolis from Wreck It Ralph 2: Ralph Breaks the Internet (2018).

We know that The Incredibles’ fashion design maven Edna Mode will feature heavily in this new EPCOT area, leading an interactive experience that allows Guests to help her rid the world of bad style. Huey, Dewey, and Louie will also be included in the Play! Pavilion in a water balloon attraction.

The Play! Pavilion is set to open for Walt Disney World Resort’s 50th Anniversary Celebration in 2021.

Construction work is also continuing in the Innoventions West and Innoventions East areas of the EPCOT theme park.

In this photo, @bioreconstruct notes:

Another picture on @bioreconstruct’s Twitter account showcases changes that are occurring in the former Innoventions East, where the MouseGear shop was located:
Here we see:

A look a both sides of grid theming above the breezeway of former Innoventions East.

Current demolition above the breezeway of former Innoventions East. pic.twitter.com/7QUzHFMC1v

Both Innoventions areas will be undergoing remodeling as part of EPCOT’s Future World reimagining.
Are you looking forward to seeing all of EPCOT’s changes for Disney World’s 50th Anniversary next year?
To plan your next Walt Disney World vacation, contact the experts at Academy Travel. They can help you visit any of the Resort’s four theme parks — EPCOT, Magic Kingdom, Disney’s Animal Kingdom, or Disney’s Hollywood Studios — using the new Disney Park Pass reservation system. Contact them today to schedule your magical trip!