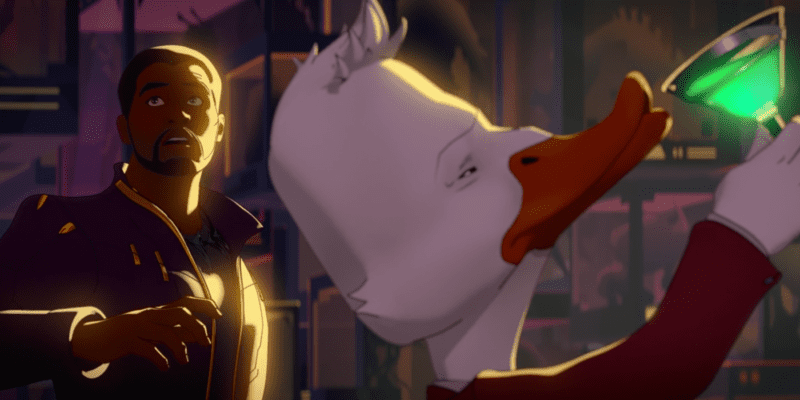 If there is one character in the Marvel Universe who divides fans, it’s Howard the Duck.

On the heels of the success of the Star Wars original trilogy — Episode IV – A New Hope (1977), Episode V – The Empire Strikes Back (1980), and Episode VI – Return of the Jedi (1983) — Lucasfilm released its widely-panned comedic science-fiction movie centered around the eponymous Marvel character, Howard the Duck, who is transported into Cleveland, Ohio where chaos ensues.

Despite the fact that the legendary Lucas served as executive producer for the live-action comic book movie, Howard the Duck remains maligned even today. With a 13% critic score on Rotten Tomatoes, it’s safe to say that Howard the Duck — who was voiced Broadway star Chip Zien in the film after Robin Williams backed out — is not exactly a beloved Marvel character.

Nonetheless, Howard the Duck returned and officially joined Kevin Feige’s Marvel Cinematic Universe in animated series What If…? last year. Howard (Seth Green) wed Darcy Lewis (Kat Dennings) and appeared in two episodes of the series, which explores what would have happened if major events in the MCU had happened differently than they actually did.

Now, it seems that Marvel’s most reviled character might be back in the MCU in live-action very soon. One recent report shared the following English translation from a French fandom magazine licensed by Marvel Studios and The Walt Disney Company:

“A webbed future? Howard the Duck seems to be part of Marvel’s plans again: in the What If…? series, he got married to Darcy Lewis…Does the duck, elected in 2009 as one of the strangest characters in the Marvel team by “Time” magazine, have a promising bright future? In any case, the She-Hulk series, which lands this year on Disney +, could reserve some “what the duck” surprises! This should delight lovers of this turbulent duck, determined to do as he pleases.”

She-Hulk, which has no official release date, but is due to hit Disney+ in 2022, is officially described as:

She-Hulk will welcome a host of Marvel characters to the series, including the Hulk, played by Mark Ruffalo, and the Abomination, played by Tim Roth. The series is directed by Kat Coiro and Anu Valia; Jessica Gao is head writer.

The series is also rumored to feature Charlie Cox returning as Matt Murdock/Daredevil. The former Netflix star made his MCU debut as Peter Parker/Spider-Man’s (Tom Holland) attorney after his identity was revealed in Spider-Man: No Way Home (2021).

The next major release in the Marvel Cinematic Universe is Doctor Strange In the Multiverse of Madness on May 6, 2022. The film will star Benedict Cumberbatch (Dr. Stephen Strange) and Elizabeth Olsen (Wanda Maximoff/Scarlet Witch).

Do you think Howard the Duck is returning to the MCU in live-action?