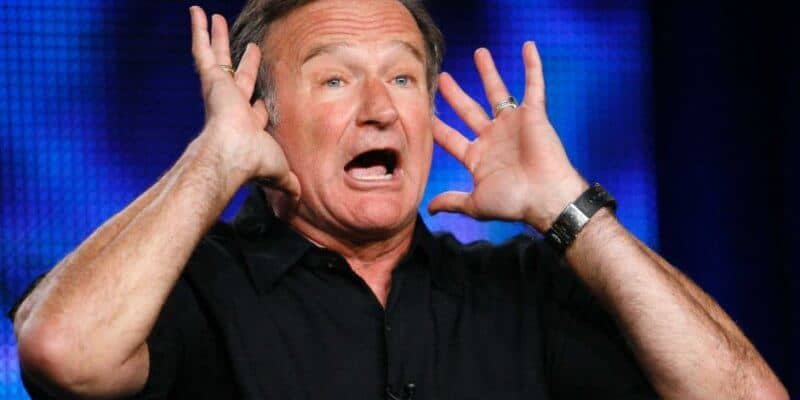 A Mrs. A Genie. A Professor. A Legend.

The late actor Robin Williams was all of the above and more. A celebrated performer, Williams’s tragic death shook the world back in 2014 after complications from Lewy body dementia. The Hollywood star was decorated with awards and universally adored especially for his performances in Disney’s Aladdin (1992), Mrs. Doubtfire (1993), Jumanji (1994), and Good Will Hunting (1997), among many others. The latter, of course, landed him an Academy Award.

While Williams did star in many of the world’s commercially and critically successful movies, the improvisational actor almost played the lead role in one of the most widely panned films of all time — Lucasfilm’s “Marvel” movie, Howard the Duck.

Howard the Duck (1986) was produced by George Lucas’s studio, Lucasfilm — yes, the company behind Star Wars. Based on the Marvel Comics character, Howard the Duck was a comedic science-fiction movie centered around the eponymous Howard who is transported into Cleveland where riotous adventures ensue.

Lucas served as executive producer for the live-action comic book movie, but to this day, Howard the Duck is still considered a remarkable failure. The film posts just a 14% critic score on Rotten Tomatoes. That being said, the role of the titular character required multiple actors to bring him to life. Along with the suit performers and the puppeteers, Broadway actor Chip Zien voiced the anthropomorphic character.

Some may know that another actor was lined up to play Howard the Duck. In fact, Robin Williams did record lines for the Lucasfilm production.

Williams, who rose to fame playing Mork in the ABC series Mork and Mindy, worked for a week on the Howard the Duck production before quitting. Why? Well, due to the production adding the voice of Howard during the editing process, it made syncing a human voice up to the live-action Duck a very difficult task. And it would be this restraint that would cause the late comedian to quit the production.

It is not hard to see why Williams felt this filmmaking process was a challenge. In a recent Howard the Duck feature via The Hollywood Reporter, leading man, Chip Zien, shed light on the Williams exit. But first for context:

At the end of a lengthy bicoastal audition process, Zien learned Robin Williams had been cast as the voice of Howard. But that would not last long, as Zien reveals the late actor-comedian left the project within the first week…

“What I was told was by the third day, Robin said, ‘I can’t do this. It is insane. I can’t get the rhythm of this. I am being confined. I am being handcuffed in order to match the flapping duck’s bill.’”

Many will know that the late Robin Williams is highly regarded for his comedic performances and irresistibly funny improvisation skills — he was so committed to his roles that there are many cuts of his comedy classic Mrs. Doubtfire, with director Chris Columbus stating an R-rated version of the family movie does exist. This barrier between him and the character would most likely have been a huge issue for the former stand-up comedian.

This isn’t the first instance of Williams not agreeing with matters pertaining to a film’s production. Shortly after Aladdin‘s release, Williams called out The Walt Disney Company and refused to work with them in the future after claims of a contractual breakdown regarding the marketing of Williams’s Genie character.

While his Howard the Duck departure definitely seems more performance-based than a direct issue with Lucasfilm, it further adds to Williams’s commitment to protecting his authenticity and creative integrity despite the powerhouse movie studio behind the project.

And if you think his near-miss performance in Howard the Duck is shocking, the comedic genius also had a great interest in playing the loveable gamekeeper Hagrid in Harry Potter and the Sorcerer’s Stone (2001) but due to J.K. Rowling’s rule of a British-only cast, the famous American actor was denied a chance to audition.

Howard the Duck in the MCU?

The character also recently trended after appearing in the trailer for Marvel’s next Disney+ show, What If…? which sees the cast of the MCU living in alternate superhero realities.

If you want to discover more about Williams’s struggle leading up to his suicide, Robin’s Wish (2020) by director Tylor Norwood offers an “intimate portrait of Robin Williams and his invulnerable spirit”. Williams left behind his wife Susan Schnieder Williams and three children — Zachary, Cody, and Zelda Williams.

Did you know that Robin Williams walked out of Howard the Duck? Let us know in the comments!