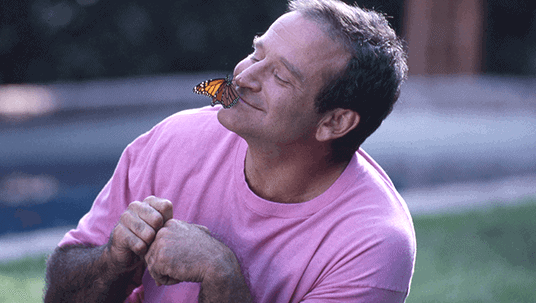 Robin Williams (Good Will Hunting, Mrs. Doubtfire, Aladdin, Flubber) was a Hollywood icon, particularly during the height of his career in the 1980s and 1990s.

When Williams shockingly committed suicide at the age of 63 in 2015, his fans, the movie industry, and — especially, of course — his family, mourned the tragic loss.

In the years since Williams’s death, his children — Zelda, Cody Alan, and Zachary Pym — and widow, Susan Schneider Williams, have raised awareness about their father’s mental health in hopes of preventing other families from experiencing what they have gone through following the Dead Poets Society (1989) star’s passing.

Recently, Zak (38), spoke out about Williams’s deteriorating condition around the time he passed away, sharing details about the form of dementia — Lewy Body Dementia — from which the legendary comedian was suffering. Zak spoke to The Genius Life podcast host Max Lugavere.

It was a poignant conversation to debut on the day that would have been Robin’s 70th birthday.

“What I saw was frustration,” said Williams of his father’s diagnosis — and misdiagnosis.

About two years before his death by suicide in 2014, doctors told Williams he had Parkinson’s disease, a disorder of the central nervous system that affects movement, causing its signature tremors.

But an autopsy would later reveal that Robin and his medical team had treated the wrong illness. “What he was going through didn’t match one to one [with] many Parkinson’s patients’ experience,” said Robin’s eldest child, whose mother is Valerie Velardi, the comic’s first wife.

Williams also shared with Lugavere that his father was extremely frustrated by his waning mental acuity, as the Jumanji (1995) actor had always prided himself on his “lightning-fast recall” onstage as a stand-up comic. Williams noted that it “was a period for him of intense searching and frustration. It’s just devastating.”

The younger man struggled immensely following the late actor’s death, even suffering from psychosis at various points. He now runs a business called PYM, taken from his middle name. Per the Post:

[PYM is a] mental wellness company that specializes in “neuro-nutrition.” It was his [Zak Williams’s] battle with alcoholism that prompted his exploration of the subject, leading him to learn more about how nutrient deficiency impacts the brain and psychological health, such as the neurotransmitter Gamma-aminobutyric acid, or GABA, supplements of which made all the difference in his recovery. “It was like night and day,” Williams said.

Williams is now committed to carrying on his father’s legacy and stopping the stigma surrounding mental illness, particularly in men, as was Robin’s wish.

The official description of Aladdin reads:

The official description of Flubber reads:

Brilliant but befuddled Professor Phillip Brainard is on the brink of inventing a revolutionary energy source and missing his wedding to fiancee Dr. Sara Jean Reynolds. When Phillip experiments with a miraculous elastic goo, Flubber emerges, leaving him ecstatic, but unmarried! Philip soon discovers that Flubber, applied to anything, enables it to bounce super high and fast.

Two best friends [played by Robin Williams and John Travolta] have their lives turned upside down when they’re unexpectedly charged with the care of six-year-old twins while on the verge of the biggest business deal of their lives. They stumble in their efforts to take care of the twins, leading to one debacle after another, and perhaps to a new-found understanding of what’s really important in life. Directed by Walt Becker.

What is your favorite Robin Williams movie?