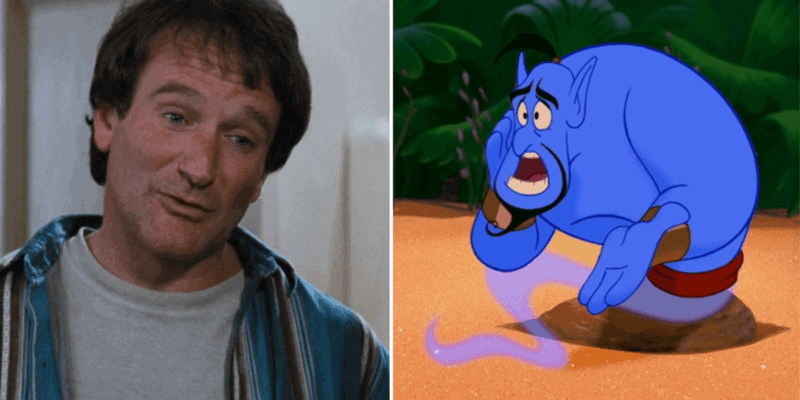 “Arabian Nights”, a magic lamp, and a parrot named Iago. These are just a few parts to one of Disney’s most famous Disney movies.

The late Robin Williams is one of the most beloved actors in the world. Known for his iconic roles in Dead Poet’s Society (1989), Steven Spielberg’s Hook (1991), and Mrs. Doubtfire (1993), the late actor brought a unique hilarity and presence to each of his performances.

What Williams is perhaps most renowned for is his voice-over work as the loveable Genie in The Walt Disney Animated Classic, Aladdin (1992). Williams starred alongside Scott Weinger (Aladdin) and Linda Larkin (Princess Jasmine) in the musical Disney film.

Aladdin became a massive success. Debuting in November 1992, the magical adventure movie — which was produced by Jeffrey Katzenburg — went on to become the highest-grossing film of the year at the worldwide box office. With music by the brilliant Alan Menken and directed by the Disney duo, John Musker and Ron Clements — who also collaborated on the fan-favorite, The Princess and the Frog (2009) — Aladdin went on to garner two Academy Awards for Best Original Score and Best Original Song for “A Whole New World”.

Robin Williams will always be uniquely connected to Aladdin, as well as the greater Walt Disney Company, due to his unforgettable turn as the Genie. But it wasn’t all smooth sailing for the actor when it came to his relationship with the “Mouse House”. Back in 1993, after Aladdin had premiered, Williams revealed his gripes with Disney and vowed never to work with them again.

What did Robin Williams say?

In the early 90s, Williams went on the record to say that Disney had hurt his feelings, indicating that he wouldn’t work for the company again. The dispute between the actor and Disney stemmed from the latter apparently breaching an agreement between the two parties that meant Disney could not use Williams or his voice to merchandise and market products for Aladdin.

The Los Angeles Times reported that a source revealed it wasn’t as much a breach of agreement but “sour grapes”. They said:

Disney executives would not comment on his remarks, but sources familiar with the dispute characterized Williams’ comments as “sour grapes” because he was paid scale of $75,000 for his work on an animated film that went on to gross more than $200 million domestically.

Williams’ claims came during a promotional appearance for Mrs. Doubtfire on The Today Show. While discussing Aladdin, the actor said:

“We had a deal,” […] “The one thing I said was I will do the voice. I’m doing it basically because I want to be part of this animation tradition. I want something for my children. One deal is, I just don’t want to sell anything–as in Burger King, as in toys, as in stuff.”

The Good Will Hunting (1997) actor elaborated on Disney’s breach of agreement:

Disney responded to Williams’ complaints by stating that the issues stemmed from the actor being annoyed by the deal he had made with Disney when the movie became a huge blockbuster hit. In the interview, Williams said that he wouldn’t likely work for Disney again, and if he did, he would acknowledge that they lied about using his voice to market Aladdin.

Williams was later issued an apology by Disney — even though they still claim no wrongdoing — by sending the actor a Picasso painting for his work on the movie.

The disgruntled Williams would later return to his character of the Genie, reprising the role in the third installment of the Aladdin franchise — Aladdin and the King of Thieves (1996) — which was a direct-to-video musical fantasy taking place after the events of The Return of Jafar (1994). For The Return of Jafar, the role of Genie was voiced by The Simpsons legend, Dan Castellaneta.

Robin Williams is without a doubt one of the most prolific actors in the movie industry and his stand-up comedy roots and improvisational skills have played a huge part in his career as a performer. There is even a reported R-Rated cut of Mrs. Doubtfire that exists, according to director Chris Columbus, that features Williams playing around with the character’s dialogue and actions. As expected, fans are clamoring for this version.

Other films Robin Williams is famous for include Jumanji (1995), co-starring with a young Kirsten Dunst, Patch Adams (1998), and Shawn Levy’s Night at the Museum trilogy (2006-2014). But it would be Williams’ role in Disney’s Aladdin that would arguably become his most universal performance.

Robin Williams’ Genie is one of the most iconic characters in Disney animation history. The voice actor was inducted into Disney’s Hall of Fame, Disney Legends, in 2009.

What is your favorite Robin Williams movie?