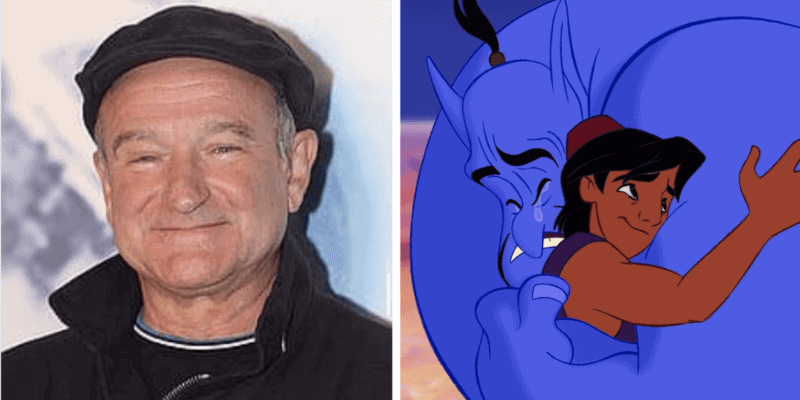 Robin Williams, who got his start in show business as a stand-up comedian and on the television show Mork & Mindy, went onto become one of the most popular actors in Hollywood.

In addition to two of his most famous roles in Good Will Hunting and Mrs. Doubtfire, Williams was featured in four Disney films throughout his career: Popeye (1980), Flubber (1997), Old Dogs (2009), and, iconically, the voice of Genie in Aladdin (1992).

Williams tragically took his own life in 2014 and is today being remembered on what would have been his 69th birthday. Numerous fans and other celebrities have taken to social media to share tributes to the late, great comedian.

“Don’t associate yourself with toxic people. It’s better to be alone and love yourself than surrounded by people that make you hate yourself.”

Actress Andrea Russett posted a simple “happy birthday” message with a butterfly emoji and a photo of a smiling Williams.

Entrepreneur Keith Mahon posted a touching message alongside one of William’s most famous, and ultimately prophetic, quotes:

“I think the saddest people always try their hardest to make people happy because they know what it’s like to feel absolutely worthless and the don’t want anyone else to feel like that.”

Robin Williams would be 69 today, such an amazing talent but tortured soul!

"I think the saddest people always try their hardest to make people happy because they know what it’s like to feel absolutely worthless and they don’t want anyone else to feel like that" – #RobinWilliams pic.twitter.com/EYoBa01rZi

SiriusXM host Eric Alper Tweeted a Robin Williams memorial message with a photo of the actor and a caption that is a good reminder for us all:

“Everyone you meet is fighting a battle you know nothing about. Be Kind. ALWAYS.”

Remembering The Genius #RobinWilliams on what would have been his 69th birthday today. pic.twitter.com/Oqtwu9LfRF

When Williams passed, he left behind his wife and three children. His daughter, Zelda, shared one of the all-time most touching tributes to her father in 2016, writing:

“Still not really sure what to do on days like today…” she wrote. “I know I can’t give you a present anymore, but I guess that means I’ll just have to keep giving them in your name instead. This year, I tried to help three causes you cared about in one; rescue dogs, people suffering from disabilities, and our nation’s wounded veterans, so I donated to freedomservicedogs.org. They rescue pups from shelters and train them so that they can be paired with someone in dire need of their help and companionship. Thought you’d get a kick out of furry, four legged friends helping change the world, one warrior in need at a time. Happy birthday Poppo. Shasha, Zakky, Codeman and I all love you and miss you like crazy. Xo”

The entire ITM team sends our condolences to those who knew Robin Williams on this difficult day.

Comments Off on Remembering Robin Williams on His 69th Birthday