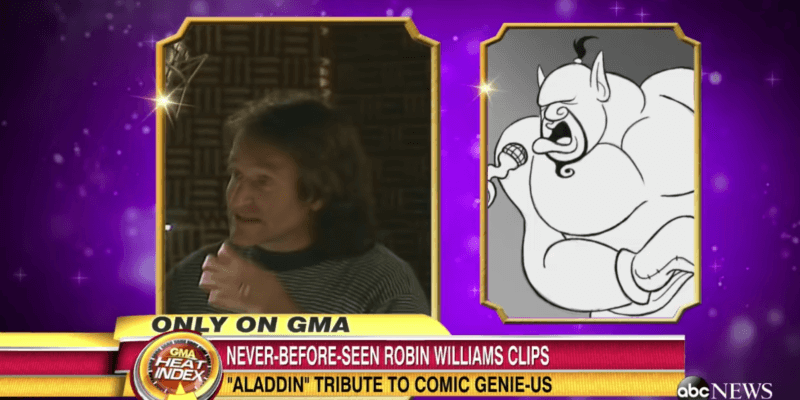 Robin Williams was a legendary actor and comedian best known for his improvisational skills and a wide variety of voices who left an incredible legacy.

From TV’s Mork and Mindy to movies including Mrs. Doubtfire, Dead Poet’s Society, Good Morning, Vietnam, and of course his role voicing the lovable Genie from Disney’s animated classic Aladdin, Robin Williams has portrayed so many iconic characters. The tragic passing of the talented actor and comedian is still felt by fans all over the world to this day.

Robin Williams would really get into his characters, which is what made him one of the most talented actors to date. Well, thanks to ABC, we can watch some rare outtake footage of Williams voicing Genie for Aladdin.

In 2015, Good Morning America did a short segment on some never-before-seen Robin Williams outtakes to celebrate nearly 25 years of the animated classic. The video shows the legendary actor in the recording booth as he voices the loveable sidekick, Genie, who was created by animator Eric Goldberg.

Additionally, viewers were able to see some of his characters that never made it to the film! You can check out the video below:

The 1992 animated film, Aladdin, and the 2019 live-action Aladdin remake, which stars Will Smith as Genie, are both currently streaming on Disney’s streaming service, Disney+. If you are not yet signed up for the service, you can get started here.

Robin Williams was a legendary actor and comedian best known for his improv and a variety of voices. He was best known in the TV world for his role on Mork and Mindy. In the movie industry, Williams played various characters and roles in several films including Mrs. Doubtfire, Dead Poet’s Society, Good Morning, Vietnam, and Aladdin.

The actor tragically took his own life in 2014 after struggling with Lewy body disease, which is known to cause depression. The entire Inside the Magic team sends our condolences to those who knew Robin Williams.

What was your favorite Robin Williams role? Let us know in the comments below.