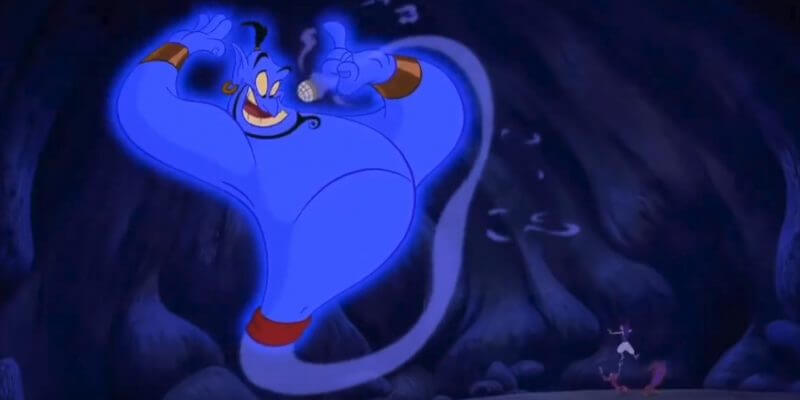 Disney legend Robin Williams was a master of improv.  His stand-up comedy acts, though not family friendly, were absolutely brilliant.  An accomplished actor, Mr. Williams has appeared in scores of movies and television shows.

His work for the Walt Disney Company is a testament to the actor/comedian’s diverse range of performances.  From the iconic Genie of the lamp in the 1992 Disney release of “Aladdin,” to his voice work as an attraction character, Robin’s contributions to the company are a treasure trove of talent. Watching Robin Williams perform is a dizzying delight. His madcap comedy routines (he clearly understands cats, for instance) are a perfect snapshot of the actor’s high energy creativity.  That creativity opened doors for him when he appeared “Happy Days,” in the role of Mork from Ork.

“Mork and Mindy,” though dated, is still just as much fun to watch today as it was when the series’ first aired in 1978.  By the time the show went off the air, in 1982, Robin Williams was a well-known name. He would go on to appear in a wide range of entertaining movies and television shows. Genres like comedy, drama, science fiction and animation have all benefited from the brilliant mind of Mr. Williams.

Even within his work for the Walt Disney Company, the scope of his talent is quite diverse and equally impressive.

Paramount Pictures and Walt Disney teamed up to produce “Popeye” in 1982. Though he did make an appearance in the 1977 comedy, “Can I DO it  . . .til I Need Glasses?,” “Popeye” was Robin Williams’ first starring role in a movie and his first film for Disney. While the movie did not do well in the box office, it was the start of Williams’ relationship with Disney.

Just as Mork from Ork was his breakthrough acting role; “Aladdin” (1992) provided Robin another vehicle to showcase his brilliant mind.  To entice him to voice the role of Genie, which was written with Williams in mind, one of his comedy routines was animated as Genie.  The sight won Robin over and his improvisational skills found new, animated life.  As Genie, Robin Williams spoofed several celebrities including Jack Nicholson, Arnold Schwarzenegger, Robert De Niro, and Jerry Lewis.  He would reprise the role again for the 1996 sequel, “Aladdin and the King of Thieves.”

1961’s “The Absent Minded Professor” was remade with Robin Williams in the starring role.  “Flubber” was released in 1997.  Professor Phillip Brainard creates a form of living rubber (“Flubber” being short for flying rubber).  Unfortunately, the remake was poorly reviewed and did not do well in the box office.

Underrated and superbly executed drama by Robin Williams in the 1999 movie “Bicentennial Man,” is truly a must-see. The role of Andrew, an MVR-14android who becomes more and more human, is a stellar example of Williams’ serious side.  A modern day Pinocchio, “Bicentennial Man” tackles topics like slavery, immortality and what it’s like to be human.

One film that Robin Williams starred in (voice) was never in movie theaters.  It debuted in Disneyland Pairs (1992), Disneyland Tokyo (1993), and Walt Disney World (1994).  Not only did Robin Williams provide a voice for the film (along with Rhea Perlman), an animatronic robot host was created in his likeness.  “The Timekeeper” (or “Visionarium” as it was called in Paris) was the first Circle-Vision 360 movie to have a structured story.

Robin Williams also appeared, as himself and an animated “lost boy,” to co-host (with Walter Cronkite) a tour of the Disney/MGM Studios animation department.

The relationship between the Walt Disney Company and Robin Williams was not always on the best of terms at times, but that should not overshadow the wonderfully entertaining talents Mr. Williams has brought to several Disney productions.

What is your favorite Robin Williams appearance in a Disney production? Please improvise your selection(s) in the comments below.

Comments Off on The Disney ROFL roles of Robin Williams