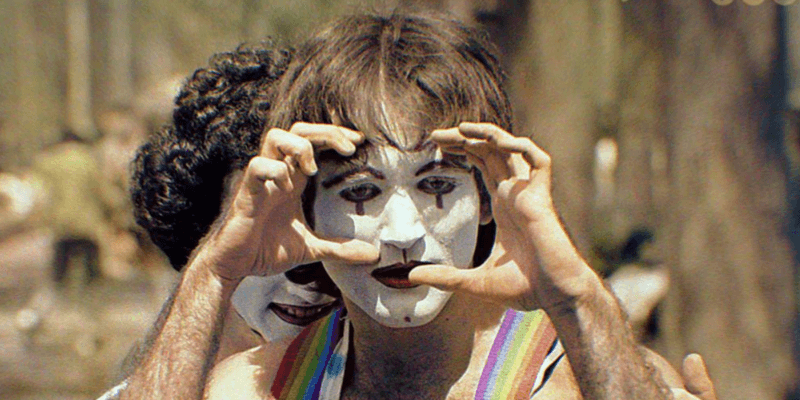 Robin Williams is one of the most beloved actors of all time. With a career spanning nearly four decades, the legendary comedian continues to stand the test of time with knockout movies like Good Will Hunting (1997) and Aladdin (1992). Across the globe, Williams was an instantly recognizable face, but one New York photographer had forgotten meeting the star before he was famous.

There are countless stories of everyday people meeting famous Hollywood actors and singers before they hit it big. Usually, one remembers the star they met before they became a “somebody,” but photographer Daniel Sorine forgot he had randomly captured Robin Williams on film in the streets of New York in 1974 as a mime.

Shortly before he’d become a household name with Mork & Mindy, Robin Williams was modestly performing in Central Park as a mime with fellow mime Todd Oppenheimer.

Sorine stated, in an email interview with PetaPixel:

“Back in the 1970’s I was a young photographer, short of funds, and not able to afford a studio or adventurous treks around the globe in search of the perfect image…Therefore, the streets of New York City became my studio as well as the studio for many other aspiring photographers.”

One day when randomly walking through Central Park with his Pentax Spotmatic camera on a 1974 weekend, Daniel Sorine stumbled upon two live performers earning some laughs from a passerby as they performed hilarious skits at mimes.

Trying to make a dime of his own, Robin Williams was polishing his now irreplaceable improvisational skills and wide catalog of wacky characters he could pull from his back pocket.

“What attracted me to Robin Williams and his fellow mime, Todd Oppenheimer, was an unusual amount of intensity, personality and physical fluidity…When I approached them with my Pentax Spotmatic they allowed me to invite them into my camera instead of me having to chase after them.”

At the time, however, Sorine didn’t know who Robin Williams was. In fact, no one did. The up-and-coming stand-up comedian and future Academy Award-winning actor (for his role in Good Will Hunting) was a then “nobody” to the world. Four years later, in 1978, Williams smashed through America’s television screens as the wacky and loveable Mork in Mork & Mindy.

His career later expanded into more comedic roles with movies like Mrs. Doubtfire (1992) and Hook (1991). But Williams was a jack of all trades. His groundbreaking performances in Dead Poets Society (1988) and The Fisher King (1997) ensured that audiences of all genres would love and appreciate the man.

Photographer Daniel Sorine had completely forgotten that he’d captured Robin Williams in his elements before the actor would go on to make a name for himself.

35 years later, Sorine dug up some old negatives from a forgotten suitcase and realized the famous face behind the mime makeup.

Robin Williams, unfortunately, passed away on August 11, 2014, shocking the world and causing millions to realize how big of a role he had in shaping their childhoods. Williams will forever be regarded as one of the greatest comedians in history, and no one can deny it.

Did you know about Robin Williams’s job as a mime? Let us know in the comments below!