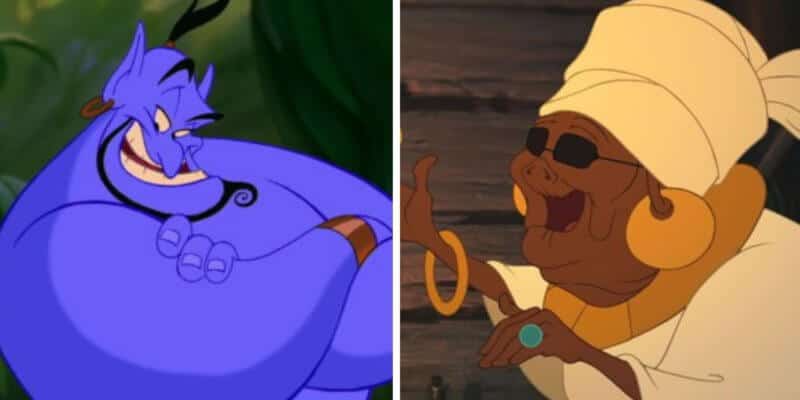 Listening to Disney fan theories is always fun and exciting, especially because Disney often leaves so many Easter eggs and references to other films and storylines in their movies. Some of the best movies to connect some of these storylines are their animated films, and now, it seems we have a new fan theory that connects Aladdin to Princess and the Frog.

Walt Disney Animations Studios film, Princess and the Frog contains various Easter eggs, many are references to Aladdin. The first of which is in the opening sequence when we see the magic carpet in the town. The second is when Mama Odie sings “Dig a Little Deeper”, and that is what we are going to discuss today.

Disney fan Nilla_Puff took to Reddit to discuss a possible theory that would link the characters in both films in an interesting way.

There have already been theories about Prince Naveen descending from Aladdin and Jasmine. But what if Genie also arrived in New Orleans sometime before Tiana’s story begins? Imagine the story: Genie arrives and falls in love. He and the unnamed woman have a daughter together, born with some magic powers, but not a Genie. They live together until the child, now an adult, leaves home to make a new life. As she ages, she finds her way into the Bayou to become Mama Odie.

Think about it- both she and Genie can make things shape-shift, use flashes of colourful smoke, and create amazing dance numbers. You can even (during the song Dig a little deeper) see the lamp from the original Aladdin- and how else could Mama Odie have got hold of it?

Aladdin- link to The Princess and the Frog? from DisneyTheories

This theory was an interesting one to read because as the post mentioned, the typical theories to connect these two films deal with characters being decedents of others, but Genie is never involved.

Do I think that this theory is plausible? It can be. While there is a lot of gray areas when it comes to fan theories, the author of this theory is so intuitive for linking some of Genie’s powers to Mama Odie.

It is also true that Mama Odie has what looks to be Genie’s lamp in her possession, which could mean that there is a relationship between the two characters. Plus, from the live-action film, we did see Genie has the capability to fall in love, so perhaps this has happened another instance, as well.

If this was true, it would mean that Aladdin, Jasmine, Naveen, and Tiana were all connected by the magical powers of Genie, but also boasts the question as to who is the mother of Mama Odie?

All of this being said, of course, this theory is just a fun fan idea, and not one that has been confirmed or acknowledged by Disney.

What do you think? Could this theory be plausible?