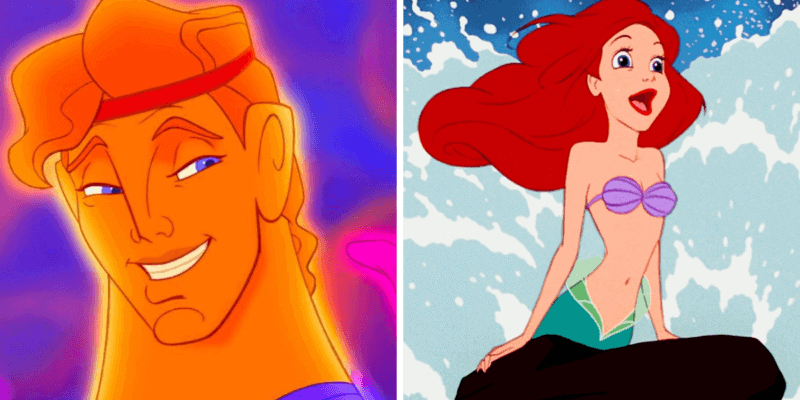 It’s no surprise to us that Pixar movies can be connected via animated universe strings or the reappearance by the Pizza Planet truck. While Disney’s animated movies don’t always have such concrete connections, fans still notice the associations between them — recycled animation sequences, characters showing up in other movies, and more deeply, the fan theories that connect several movies.

One intriguing fan theory that is making the rounds on the internet once again is that Hercules of the animated film Hercules and Ariel of The Little Mermaid are actually cousins. This theory holds up with the insertion of Greek mythology and a little family tree.

Hercules and Ariel Are Cousins?

Even before Disney’s Snow White and the Seven Dwarfs hit the silver screen, Walt and his nine old men were using fairy tales, folklore, and mythology to populate their story vault. Twisting each into their own Disneyfied mold with more family-friendly endings and elements, these stories became Disney storytelling cornerstones with hits like Aladdin, The Little Mermaid, and Hercules.

Disney fans, watching these movies over and over, have started to piece together some of these storylines (especially those connected by Green mythology) and draw some conclusions. For instance, the familial relationship between demigod Hercules and royal Princess Ariel. Check out our chart below, which illustrates the Greek-mythology-based family connection.

Cronus and Rhea (Titans) birthed many children — among them, brothers Zeus, Hades, Poseidon. Greek God Zeus seduced the human woman Alcmene (according to legend) and birthed Hercules, making him a demigod. Disney made Zeus’s mythological wife Hera his mother and banished Alcmene to the role of the farmer’s wife.

Zeus’s brother Poseidon married Amphitrite and birthed Triton. (Does that make sea witch Ursula Poseidon’s daughter? Or Morgana?) King Triton, along with Ariel’s mother Athena, had Ariel and her seven sisters. That makes Triton and Hercules first cousins, and therefore Ariel, a second cousin to Hercules. Phew… what a family tree!

Now, Hercules is based purely on a Greek story of the Gods, while The Little Mermaid is based on a Danish fairy tale following the curiosity of everyone’s favorite Disney Princess. Anderson’s original text only mentions “The Sea King,” so Disney fittingly chose Poseidon’s lesser-known son, Triton, as the Sea King.

Of course, we’re pretty sure that Disney may never assume this familial relationship between Hercules and Ariel, but it’s a great argument that they could very well be related, based purely on mythological stories that Disney heavily leans on for storytelling. Each Disney fan may need to decide for themselves if the fan theory holds up or if they really think Hercules and Ariel are cousins. We can only hope for a large Disney universe story that continues to create these connections.

Interested in more fan theories about Disney characters? Try the Frozen 2 theory that muses over Elsa’s possible death. It’s a compelling yet chilly argument! Or perhaps you’d love to explore the real-life science behind The Lion King theory where Scar may have eaten Mufasa. Lastly, the idea that Rapunzel has everlasting life is pretty cool. That fan theory explores her magic and all of its possibilities.

Leave us a comment with your thoughts on this Hercules and Ariel cousin relationship!