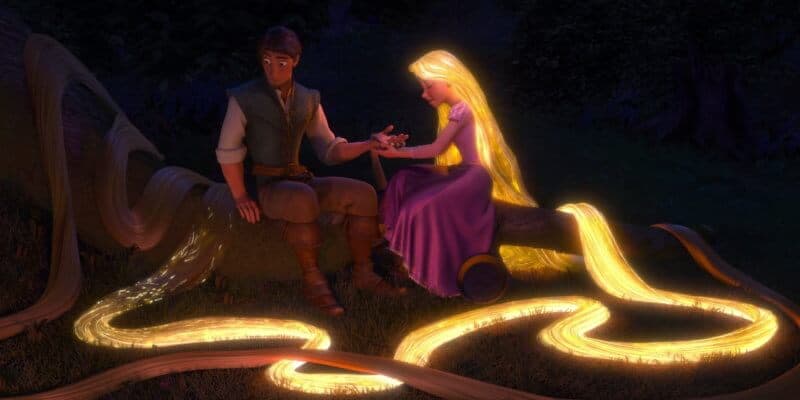 Disney fans are always coming up with new fan theories — Some of which seem to be extremely accurate and could very well be true.

The latest Disney fan theory revolves around the beloved Rapunzel from the Disney classic movie, Tangled. Everyone knows Rapunzel holds magical healing powers, which originated from a special flower. Once Rapunzel started to sing, her hair would glow and heal those who needed it — Including reversing the aging process, which, if you’ve seen the movie, is why Mother Gothel kept Rapunzel locked away high in the tower.

One Reddit User, u/KapiTod, realized that not only does this magic power come from Rapunzel’s hair, but her tears as well — Meaning, the magical healing powers are within her fluids. So does that make Rapunzel immortal? Let’s analyze this Disney fan theory!

The Reddit User u/KapiTod, began the fan theory post with some background on the story of the film:

Watching Tangled with my goddaughter I am reminded of a little biology theory I came up with.

In the movie Tangled the princess Rapunzel has magic hair. No big deal, just usual Disney stuff. It’s golden blonde and when she sings a special song it glows and heals people/reverses the aging process. It’s pretty awesome looking too. The catch however is that it cannot be cut, it it’s cut then it turns brown, loses it’s magic and never grows again. Bummer.

Now these magical healing powers come from a flower, a special flower that grew from a fallen sunbeam. When you sang it the song it would heal you, it was crazy whimsical broh. Anyway whilst Rapunzel’s mother was pregnant with her she got sick, the flower was found, the petals were dissolved into a potion, the mother drank it and instantly got better. Meanwhile embryonic Rapunzel absorbed the damned flower powers for herself. Hence, magic healing hair. She is the new flower so to speak.

The user went on to explain how their biology theory comes to play out — and personally, I think it totally makes sense and wouldn’t be surprised if it’s true!

Anyway towards the end of the movie her hair gets cut and someone gets fatally wounded. She can’t heal him, very sad moment. Distraught she weeps over the guys body whilst singing her little healing song. SUDDENLY!!!!! Her tears heal him. They contain the magical healing powers, not just her hair.

Now the implications of this are pretty vast. Basically what it means is that the healing powers of the flower were contained not just in Rapunzel’s hair but also in her… “fluids”. The liquid in her tears have healing powers, by extension this would also be in her saliva, her blood, and other liquids produced by the female body. All this magical bullsh*t is coursing through her veins. If someone got a cut she could spit on the wound and sing her song and the guy would heal!

Not only this but since the magic is part of her if she were to get pregnant then her child would take in all that magical goodness via the umbilical cord during growth. So not only is Rapunzel essentially immortal but all of her children will be as well.

So if Rapunzel really is immortal — if she ever had children with Flynn Rider, they too would become immortal since the magical powers are in her blood. How cool?

What do you think of this Disney fan theory? Let us know in the comments.

Comments Off on Is Rapunzel Immortal? This Fan Theory Makes a Compelling Case!