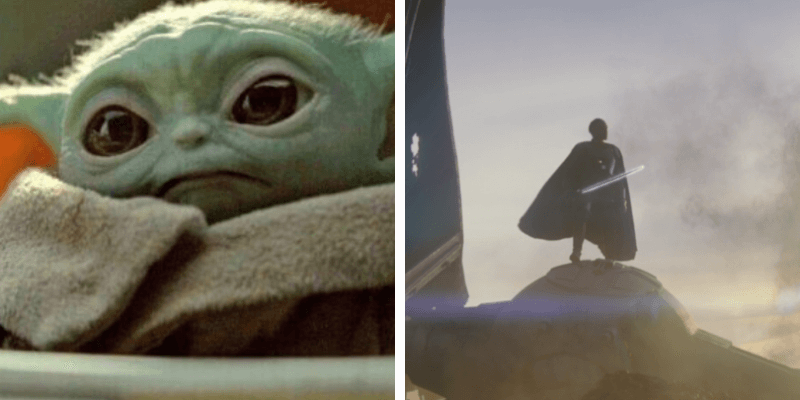 The following fan theory is a strong but simple one. While it is my genuine opinion, I am writing this to hopefully bring more Star Wars fans deeper into the fandom; to give them a plot line to root for that gently broadens their understanding of the Star Wars stories and that hopefully inspires them to watch the TV shows on Disney+. Whether you agree with me or not, I hope you use this theory to spark conversations with your “Baby Yoda”-loving fans on the fringe of the fandom. Enjoy.

The last scene of The Mandalorian season 1 finale is unforgettable. In the wreckage of Moff Gideon’s tie fighter, the off-world Jawas–and we the audience–hear something cutting through the metal. Suddenly, a lightsaber blade breaks through the hull, scaring the scavengers away. It slices a sizeable a hole out of the ship and the chief antagonist from season one escapes holding a lightsaber, alluding to the audience that he had the sword this whole time. But this lightsaber is different. Its blade is black.

Moff Gideon emerges surprisingly unscathed. He stands atop his destroyed fighter, surveys his perimeter, and gives us an awesome pose with the weird lightsaber in-hand. It is a memorable moment. A cliffhanger daunting, foreshadowing, and no-doubt confusing.

For those of you who enjoyed The Mandalorian but never committed to watching any other Star Wars stuff beyond the movies, here is some clarity.

That lightsaber is as special as it looks. It is called, appropriately enough, “The Darksaber.” It has tremendous symbolic significance regarding the relationship between the Jedi and the Mandalorians. I will explain, simply, the Darksaber’s backstory, its significance and why by the end of Jon Favreau’s show, “The Child”(a.k.a. “Baby Yoda”) will become its new owner.

The Darksaber was made by a man called Tarre Vizsla: the first Mandalorian to become a Jedi Knight. But this happened in a time called “The Age of the Old Republic.” That was centuries before the start of Episode I: The Phantom Menace. To many fans’ disappointment, Lucasfilm has yet to make anything about that Age beyond some highly-praised video games. But, I digress.

When Vizsla died, the Darksaber was locked away in a Jedi Temple. Until members of his house snuck into the temple and stole it back. It was then that the Darksaber became a symbol of power. A Mandalorian “Excaliber.” For a time, whoever wielded the Darksaber could unite all of Mandalore.

But there was a falling out between the Jedi and the Mandalorians. An infamous war broke out, and a divide existed ever since.

Since the raid on the Jedi Temple, the Darksaber was passed down to every new head of House Vizsla until we see it in the TV show, Star Wars: The Clone Wars.

We find the Darksaber in possession of the leader of House Vizsla–now known as the terrorist cell, “Death Watch”–named Pre Vizsla. After successfully staging a coup and seizing control of the entire planet of Mandalore, Pre Vizsla is defeated by Darth Maul.

Maul claims the sword as the rightful ruler of Mandalore but he is later defeated by Emperor Palpatine, and we don’t see the Darksaber for a while.

We find the Darksaber again in the show Star Wars Rebels. A Mandalorian girl, Sabine, finds it on Maul’s homeworld of Dathomir. After using the saber to fan the flame of rebellion on her home planet, Sabine gives it to a woman named Bo-Katan Kryze because she believes her to be the Mandalorian most-worthy to lead their people in a rebellion against the Empire.

Where its story leaves off

We don’t know how Moff Gideon got possession of the Darksaber. He could have claimed it as a prize during The Great Purge “Mando” keeps referring to. He could be a traitorous descendant of House Vizsla. The question of how he got it will hopefully be answered in Season 2.

But regardless of how Moff Gideon got it, I’m willing to be real Republic Credits that “Baby Yoda”/”The Child” will be the rightful owner in the end.

Episodes that feature the Darksaber

Every episode is available on Disney+

Related: What is the Correct Order to Watch the “Star Wars” Movies and Shows?

Here’s Why “Baby Yoda” Could Get This Extra-Special Lightsaber:

He is the next Mandalorian Jedi

In the season one finale, we learn “the Mandalorians aren’t a race. It’s a creed.” Afterward, the Armorer, easily assumed to be the Matriarch of that group of Mandalorians, dawns Din Djarin (“Mando”) with his signet and declares “The Child” to be his ward. She instructs Djarin to take “The Child” as his own and to train him in the ways of Mandalore until he can bring the kid to the Jedi.

“The Child” will be brought up with both the ways of the Mandalorians and the Jedi. He will rebuild the bridge between the two orders.

The Darksaber’s story will have come full circle

Now, would it be cool if Djarin–and therefore “Baby Yoda”–were in House Vizsla? Yes. But after The Great Purge, and how Sabine gave the sword to the woman she saw best to lead–regardless of clan name–I don’t think “House Identity” will be as important a plot point as the fact that we get another Mandalorian Jedi Knight. And one that’s the same species as Yoda!

If I were to make some series predictions…

I’d also say, because Din Djarin can’t tell the difference between one force wielder from another, we’ll meet some Jedi but we’ll also see some pretty close calls with the Sith. (Yes, we will be screaming at our screens when an unsuspecting Sith tells “Mando,” “Give me the child, I’ll show him the ways of the Force.”) It will shed more light on the surviving strands of Jedi and Sith outside of the main Skywalker storyline.

At the end of all things, Moff Gideon will be dead, “Baby Yoda” will be more grown-up, and “Mando” will either be dead or come inches away from death once again.

Do you think “Baby Yoda” will inherit the Darksaber? What are you hoping to see and learn in Season 2? Let us know in the comments!