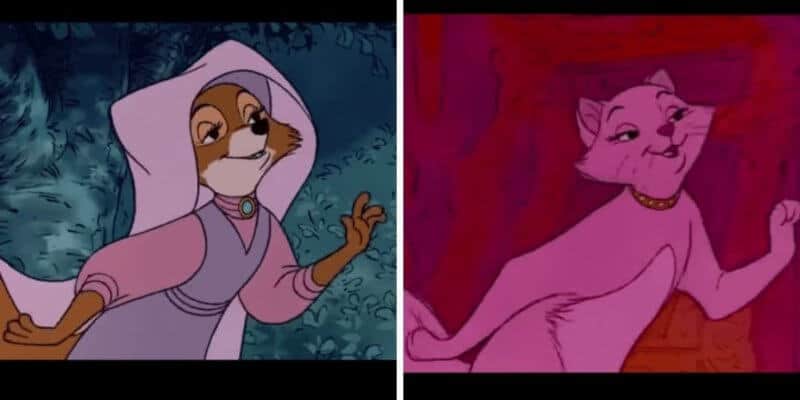 Walt Disney Animation — there is nothing like it. I mean, Disney movies bring the child out in all of us. But are there more similarities between the Disney classics than we had realized?

If you are a hardcore Disney fan, you may have noticed that some scenes from the older Disney animated films look unusually familiar, especially if you paid close attention to the Phony King of England scene in the Disney film, Robin Hood. So did Disney recycle animation for multiple films?

Well, Business Insider has pointed out that the process of recycled footage is called rotoscoping, and it’s not as rare as one may think. Rotoscoping involves animators drawing and tracing over old footage to create new scenes and characters — Something the Walt Disney Company has done time and time again to save time and money on their Disney movies.

In fact, Disney Legend Floyd Norman, confirmed that many of the Disney movies he worked on did reuse some animation and recycled footage. “It’s actually harder and takes longer to redraw an existing sequence,” Norman told GeekDad. “It’s a lot faster and easier to just do new animation, and it’s a lot more fun for the animators. But Woolie liked to play it safe and use stuff he knew would work. That’s all it was.”

The person he is referring to when saying “Woolie” was Woolie Reitherman, also known as Wolfgang Reitherman, a German-American animator, director, and producer. Woolie was one of the Nine Old Men of core Disney animators at Walt Disney Productions and he directed many of the Disney movies in question, including The Jungle Book, Robin Hood, the Sword in the Stone, Winnie the Pooh, 101 Dalmatians and The Aristocats.

So, even though Disney is known for its classic animated movies, they still have recycled characters and animation to make their movies. Let’s take a look closer at some of these recycled animation scenes from classic Disney films that have been in question.

If you pay close attention to two specific scenes from Robin Hood and The Jungle Book, there are actually quite a few noticeable side by side comparisons here.

First up, Little John from the Disney film, Robin Hood, playing the banjo closely resembles Baloo dancing during the “I Wan’na Be Like You” scene in The Jungle Book. It’s safe to say that this is one prime example of the recycled footage from Disney animation.

There is also a close up of Little John’s head as he dances in the same scene, which is an identical shot of Baloo dancing in the famous Jungle Book scene.

Now, let’s check out this side by side scene of Lady Cluck dancing with Little John compared to King Louie dancing with Baloo. This is pretty identical in our eyes. Just another example of recycled footage from Disney film to film.

Robin Hood vs. The Aristocats

Everyone knows and loves the hit song “Everybody Wants To Be A Cat” from Disney’s animated classic The Aristocats. Doesn’t it look a bit familiar after rewatching the Phony King of England scene in the Disney film, Robin Hood?

Let’s look at the clip from Maid Marian dancing compared to Duchess dancing. It’s identical other than the characters themselves. But the movements are exact, which proves this is another example of Disney animators recycling animation.

Same with the critters from Robin Hood compared to the scat cats from The Artisocats.

Robin Hood vs. Snow White and the Seven Dwarfs

We think these are all pretty obvious scenarios showing scenes from Disney movies where Disney animators have reused drawings and recycled them into new animations, but again, what’s the harm in that? This process helped the company not only save time, but save money. And we all still love the classics, don’t we?

You can see a full side by side comparison in the video below.

101 Dalmatians, The Sword and the Stone, Beauty and the Beast, and More!

This isn’t the only YouTube video that has pointed out the recycled animation by Disney. If you take a look at ScreenRant’s YouTube clip below, they show other Disney films being reused as well, but this time they show films like Sleeping Beauty, Beauty and the Beast, 101 Dalmatians, and more.

One prime example that ScreenRant points out is the recycled animation of animals, specifically dogs, within Disney movies. The Walt Disney Company clearly used the puppies from 101 Dalmatians for other Disney movies such as The Jungle Book and even The Sword and the Stone since these drawings were easy to manipulate into other characters.

Take a look below.

So, what do you think of the side by side Disney animated comparisons? Does the recycled animation bother you? Let us know in the comments below.