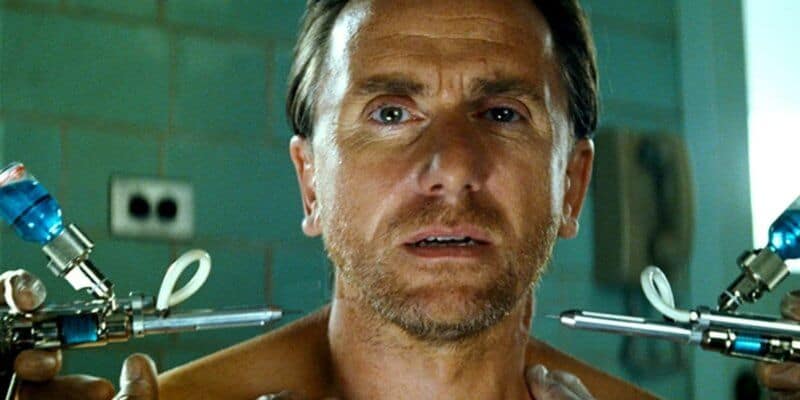 Fans were excited when Marvel Studios President Kevin Feige announced during the 2020 Disney Investor Day event that Tim Roth would be returning to the Marvel Cinematic Universe. The actor is set to reprise his role as the Abomination in the upcoming Disney+ Original series, She-Hulk with Tatiana Maslany starring as Jennifer Walters/She-Hulk alongside Mark Ruffalo’s Bruce Banner/Hulk.

Fans were excited to see Tim Roth’s Emil Blonsky/Abomination make a cameo in Shang Chi and the Legend of the Ten Rings (2021) having Abomination fighting Sorcerer Supreme, Wong (Benedict Wong) in Xialing’s fighting club. In a recent interview, Tim Roth confirmed that fans would be seeing his character become human again which is a big deal because, unlike Hulk, The Abomination can’t change back into a human after the transformation.

Abomination first appeared in the Incredible Hulk (2009) as Tim Roth starred alongside Edward Norton who played Bruce Banner/Hulk in the movie before being recast afterward to Mark Ruffalo. The movie also introduced General Thaddeus Ross played by William Hurt who has been not only an antagonist for the Incredible Hulk, but also for the Avengers in Captain America Civil War (2016) as he became Secretary of State and handed the Sokovia Accords for the Avengers to sign, and also one of the antagonists for Scarlett Johansson’s Natasha Romanoff/Black Widow in her solo movie Black Widow (2021) set right after the events of Civil War.

From an interview with Tim Roth, DisInsider shares what his thoughts are on his character:

More specifically, when asked if he would ever get his physical presence back in the MCU, Roth said, “Oh yeah!” without hesitation.

Roth also had more to say about what his thoughts were on his character’s return to the MCU and his thoughts on She-Hulk:

Additionally, Roth described his return as “weird,” which makes sense considering that a lot has changed in both the MCU and in the world of technology since 2008. He also went on to call series star Tatiana Maslany “a powerhouse,” before ultimately teasing that fans should expect to, “see a bit of everything in [it].”

It is great to see characters like the Abomination return in a big way to the MCU. Even though we did have the Abomination in Shang Chi, it was a fun cameo with no relevance to his overall story other than his looks have changed to be more comic accurate. She-Hulk does offer a lot of questions already for Bruce Banner as he is seen in the teaser to be back in human form and in other parts to be Professor Hulk leaving fans to wonder if Bruce Banner has found a way back to his human form. With the Abomination, it will be interesting to see if it will end up with Banner curing Blonksy and restoring him to being only a  human or if he can go back and forth between forms, but if the latter is true, it will definitely be a painful transformation for the character due to his exoskeleton.

Fans have been wondering if Thaddeus Ross will become the Red Hulk in this Disney+ series as the comics have had Ross’ character as one of the prominent members of the Thunderbolts which has been teased with Julia Louis Dreyfus’s Contessa Valentina Allegra de Fontaine recruiting US Agent (Wyatt Russell) and hiring Black Widow’s “sister”, Yelena Belova (Florence Pugh), for work. Marvel has been introducing a lot of characters in Phase Four and hinting at the formation of new superhero groups such as the Defenders, Young Avengers, and the Thunderbolts.

Are you excited to see Abomination come back in She-Hulk? Let us know in the comments below.