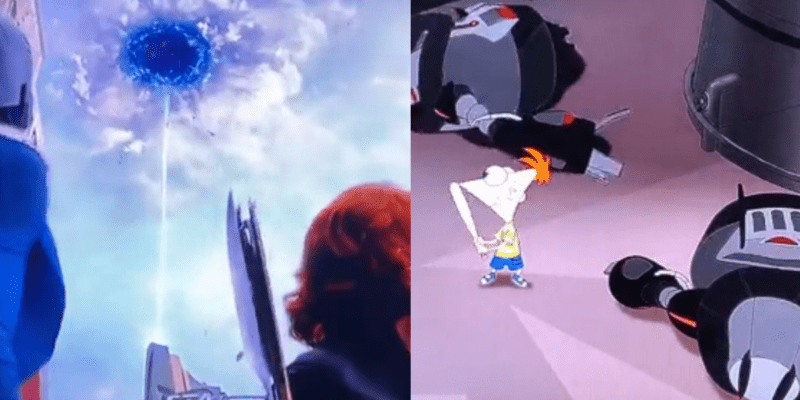 It’s been nearly a decade since the first Avengers (2012) movie made its debut in theaters.

At the time, the epic film was one of the highest-grossing box office attractions ever and was so successful; it spawned entire phases of Marvel Cinematic Universe films, with 20 others now released and many more in the works.

Who can forget the epic battle scene at the end of the movie?

Loki (Tom Hiddleston) uses the Tesseract and a wormhole generator to open a wormhole above Stark Tower to the Chitauri fleet in space, launching an invasion. The Avengers battle the army, and Iron Man (Robert Downey Jr.) intercepts a nuclear missile in which he flies into the portal. When it detonates, the Chitauri mothership is destroyed, and the portal closes, and the entire army is disabled.

While it certainly is a scene worth remembering, Phineas and Ferb Co-Creator Dan Povenmire, who is also the voice of Dr. Doofenshmirtz points out some intriguing similarities between that scene and the climactic scene of Phineas and Ferb the Movie: Across the 2nd Dimension [2011], which debuted a year earlier.

In Phineas and Ferb the Movie: Across the 2nd Dimension, there is also a large building [Doofenshmirtz Evil Inc.] that towers over the city.

The portal is connected from the building to the sky, unleashing an army to attack the city.

The heroes– in this case Phineas, Ferb, and friends– battle of the army until the portal is shut, causing those robots to collapse.

While they’re not exactly the same, there are certainly some similarities, and as Povenmire points out in the video below, Phineas and Ferb was released a full year before.

Either way you look at it, you can stream both Phineas and Ferb and The Avengers on Disney Plus.

What do you remember most fondly about Phineas and Ferb? Let us know in the comment section.

Comments Off on Did Marvel Steal Its ‘Avengers’ Battle Scene From ‘Phineas And Ferb?’