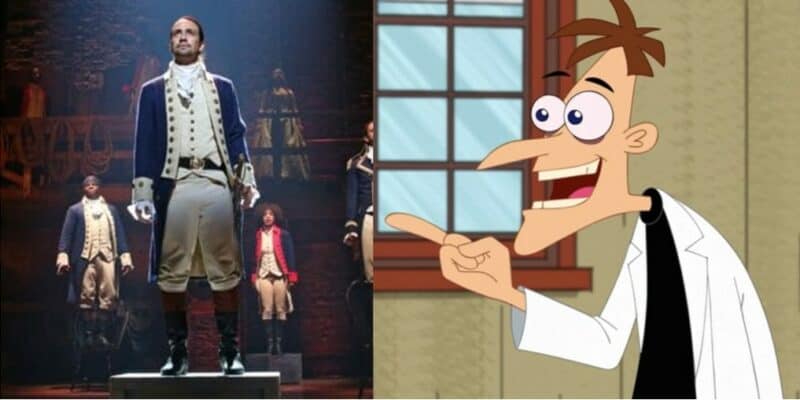 Hamilton has wowed crowds since the musical debuted in 2015. The popular musical tells the story of American Founding Father Alexander Hamilton with spirited music sung and rapped through the performance. The talented Lin-Manuel Miranda wrote and performed in the musical. And when COVID-19 hit, Disney and Lin-Manuel decided to drop Hamilton on Disney+ in the summer of 2020 for all of us to enjoy right from our streaming devices.

Since then, the musical has blown up and it’s now rare to find someone that can’t sing along with at least one or more Hamilton songs. Even Dr. Doofenshmirtz, the villain from the animated Disney series, Phineas and Ferb, knows how to spin Hamilton!

Dan Povenmire, the talented voice actor for Dr. Doofenshmirtz, has taken to social media to impress his followers with his own twist on the Hamilton song, “Alexander Hamilton.” Except Dr. Doofenshmirtz’s spin is about his arch-nemesis, Perry the Platypus.

Dan (the voice of Dr. Doofenshmirtz) posted a TikTok video yesterday (November 29) with the note “From a few years ago.” The viral video already has over 1.6 million views and counting. Check it out below:

RELATED: Should Disney Add a “Hamilton” Overlay to Liberty Square or The American Adventure?

Amazing! Best minute and thirty seconds spent today! We could totally see this taking off with a Phineas and Ferb – Hamilton spinoff.

What do you think of Dr. Doofenshmirtz’s performance in the video? Let us know your thoughts in the comments!

Comments Off on Voice of Dr. Doofenshmirtz Performs ‘Hamilton’ Song