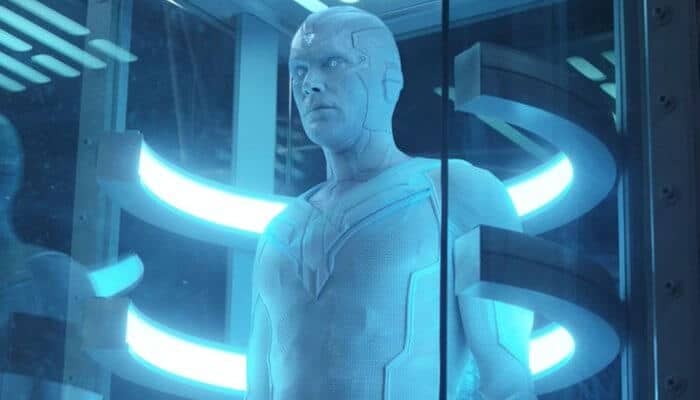 Fans thought they’d seen the end of Paul Bettany’s Vision when the character was killed off (twice) at the end of Avengers: Infinity War—especially because he didn’t even appear in any of Avengers: Endgame.

But the Disney+ show WandaVision brought Vision back to life (kind of) via a story that had Elizabeth Olsen’s Wanda reconstructing a pretend reality called a “hex” where, using the Mind Stone, she was able to “resurrect” him through a sitcom-inspired life.

At the end of WandaVision, Vision realized his true story. But that was only half the battle. A company named S.W.O.R.D. had been recreating Vision from the parts of him that they’d gathered after his death: their own sentient weapon. Known as “White Vision,” he was sent to Westview to destroy Wanda. The two Visions engaged in a laser battle where they both realized they were the real Visions, leading White Vision to fly away…and leaving the door open for the character’s return.

When asked in a recent interview with The Playlist if we could see the character again, Bettany didn’t exactly take the bait when asked if he could return for future projects. But he didn’t say no, either.

“I mean, I guess it would be difficult to introduce White Vision and not deal with him in some way, but we have not discussed that,” Bettany said. “I mean, I’m honest with you. I still don’t know that, I don’t have a contract. I don’t know that. I don’t know that at all. And all that I do know is, as far as this sort of traunch of press goes, it’s for an Emmy push, which is for a limited series. So it doesn’t look like that happening again.”

Marvel actors are notorious for keeping secrets, but we’re inclined to believe that even if Kevin Feige has a plan for White Vision to return, he hasn’t given many details yet. Which makes sense — we’ve got a lot more stories we have to deal with in the MCU before we return to characters we’ve already seen. White Vision’s exit in WandaVision merely sets up a way for him to be reintroduced in the future, if the storyline calls for it.

We initially wrote about the rumors that Marvel was developing a series focused on Vision which would debut after Doctor Strange in the Multiverse of Madness. That series, according to rumors and speculation, could focus on the 2015 comic series written by Tom King with art by Gabriel Hernandez Walta that focuses on Vision trying to create his own suburban Android life.

Of course, the biggest way fans might see White Vision again is in Doctor Strange in the Multiverse of Madness. But for now, we’ll just have to make do with theorizing on our own. The biggest thing to remember? White Vision is definitely not out of the picture.

Do you think we’ll see White Vision again in the MCU? Let us know in the comments!